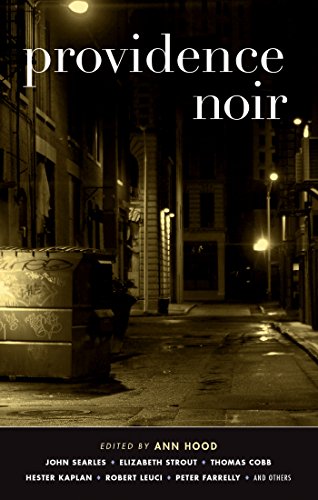 Providence Noir is the latest anthology in the groundbreaking and award-winning series from Akashic Books, first launched in 2004 starting with Brooklyn Noir.

Ann Hood initiates things with a gripping and intimate and biographical introduction, whetting your appetite in anticipation of what is to come as the pages turn. And come it does. And how.

There are so many fantastic and originals stories in this collection, it is difficult to pick a core winner. The reader is spoilt for choice, and it all comes down to personal preference and taste.

John Searles’ “The Pig” is a powerful, poignant testimony to the erasing horrors of Alzheimer’s and the nightmares it creates in the mind. Despite the blood-letting in the story, one can’t help but smile at some of the scenes created with the ink of dark humor and acerbic observation of human nature at its weakest, but ultimately also its strongest. One will not look at golf balls and cookies in the same light, ever again...

Another strong contender is Robert Leuci’s “The Vengeance Taker,” proving that vengeance really does become a dish best served cold and bloody, when a young girl goes hunting, many years later, for the Mafia thugs responsible for the murders of her parents. Uncomfortable reading, to say the least, and like the young girl, the story takes no prisoners.

Double Indemnity meets The River’s Edge in Ann Hood’s twisted and intelligent “Under The Shepard Clock.” Noir in all its criminally cunning and scheming glory, delivering a knockout denouement you never see coming until it’s too late. Fatally.

In Hester’s Kaplan’s “Femur” a young boy becomes a detective when he deduces a discovered bone indicates his father’s involvement in the disappearance and possible murder of Ellen, the father’s one-time girlfriend:

“Maybe, if he was very lucky, he’d see Ellen, his father’s last girlfriend, out rowing on the water again—but he also knew that was impossible. She’d left Providence three months ago, though he didn’t know where she’s gone or why; today she’s be only mirage of his missing her.”

The collection is completed with the perfect bookend, the slyly funny “The Saturday Night Before Easter Sunday” by Peter Farrelly.