The Provensen Book of Fairy Tales 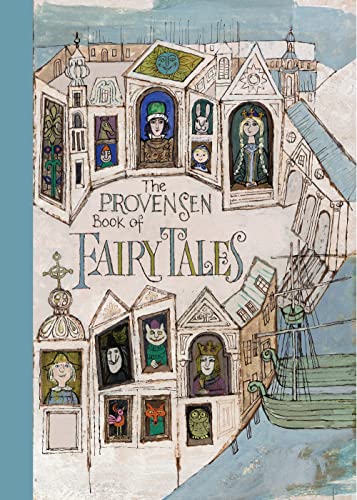 “a new generation will fall in love with this beautiful, witty, and modern descendant of Grimm’s Fairy Tales . . . It is a book that has stood the test of time and passed with flying colors.”

First published in 1971, The Provensen Book of Fairy Tales was beloved by young readers and quickly was considered a “classic.” Inexplicably, for many decades it was out of print. Now it has been rereleased to delight a new generation of youngsters and fairy tale afficionados.

This is a collection of 12 “literary” fairy tales (stories written by authors as opposed to folk fairy tales that are passed down through the centuries and across the world by oral tradition). The Provensens included original tales by well-known authors such as Oscar Wilde (“The Happy Prince”), Hans Christian Anderson (“The Nightingale”), and A. A. Milne (“Prince Rabbit”), as well as lesser known, but highly regarded authors such as Elinor Mordaunt (“The Prince and the Goose Girl”), \ Henry Beston (“The Lost Half-Hour”), and Seumas MacManus (“Feather O’ My Wing”).

Many of these stories have their roots in ancient folk tales, but in these literary versions, the author often gives them a new spin. Writing in the early 20th century, Australian writer Elinor Mordaunt’s “The Prince and the Goose Girl” is based on a folk tale originally collected and written down by the brothers Grimm. But Mordaunt’s version is very different—and very modern. The goose girl is a spunky, independent character who boldly stands up to the fearsome, tyrannical prince.

“Only Erith, the goose girl, feared him not at all. ‘He’s only a man,’ she would say.’ What you tell of his sword and his battle-ax and his great frown is all a child’s tale. He is just a man. He eats and sleeps like other men; if you wounded him, he would bleed. Someday he will love a woman a be her slave for a while just as any other man is. I wouldn’t give that for the great bully!’ she added, and snapped her little fingers.”

She repeatedly spurns the prince, who becomes more and more interested in her, but nevertheless punishes her for her resistance. At one point he scoops her up on his enormous black horse and threatens to ride over the cliff with her.

“’Ride over,’ laughed Erith. And she took the willow rod that still in her hand and smote the horse’s neck with it. ‘Over the cliff, brave horse, and a good riddance of a bad man it will be,’ said she.”

Alice and Martin Provensen met in 1943 and soon began collaborating. A year later they won the Caldecott Medal, an annual award given to the artist of the most distinguished American picture book, for their picture book The Glorious Flight. They were married that same year.

During their 44-year collaboration, they illustrated more than 40 books, including 19 they co-authored. They were a runner-up for the 1982 Caldecott Medal as illustrators of A Visit to William Blake's Inn by Nancy Willard, and eight times they were on The New York Times list of the Ten Best Illustrated Books. According to Alice, "We were a true collaboration. Martin and I really were one artist."

The colorful, eye-catching illustrations in this fairy tale collection reflect the mid-20th century style of much of the Provensens’ work. The pictures sparkle with humor and color. Each deserves a long look to find witty details. Some observant readers may notice echoes of the style of early Disney animated movies. Martin worked for the Walt Disney Studio in the story department from 1937 to 1941. There he collaborated on the classic films Pinocchio, Fantasia, and Dumbo.

Full of magic, ingenuity, and humor, The Provensen Book of Fairy Tales is a book that was treasured by those lucky enough to own a copy in the 1970s. Now a new generation will fall in love with this beautiful, witty, and modern descendant of Grimm’s Fairy Tales and Andrew & Leonora Blanche Alleyne Lang’s colored fairy story books. It is a book that has stood the test of time and passed with flying colors.