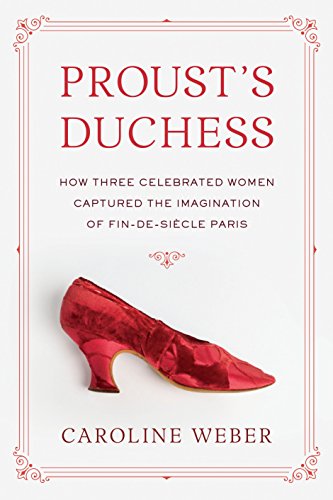 “a fascinating read for anyone interested in fin-de –siècle Parisian society . . .”

Proust’s Duchess chronicles in exemplary detail the wiles and wardrobes of three doyennes of Parisian high society: Geneviève Halévy Bizet Straus (1849–1926); Laure de Sade, Comtesse de Adhéaume de Chevigné (1859–1936); and Élisabeth de Riquet de Caraman-Chimay, the Comtesse Greffulhe (1860–1952) —who were amalgamated by Proust into the Duchess of Guermantes in his  autobiographical novel Remembrance of Things Past.

These three women “hemmed in by unhappy marriages and restrictive gender norms . . . sought a measure of freedom and fulfilment by recasting themselves as icons. They reinvented themselves as archetypes of a storied Parisian fiefdom made up of visiting crowned heads and local aristocrats” and known variously as the “monde,” . . . the “gratin,” . . . and “the Faubourg,” the latter a reference to the exclusive neighborhood preferred by the aristocracy.

Marcel Proust, half Jewish and from a comfortable bourgeois family, gained access to the salons and circles of these “icons” initially through well-connected high school friends, and was first dazzled and enchanted, and finally repelled by their egoism, pretence, and insistent triviality.

Weber’s research into the three protagonists and their milieu is exhaustive, and the progressive accumulation of very fine detail needs to be ingested slowly. Very often in her repetition of titles she seems as “star-struck” as was Proust when he “first embarked upon his long arduous climb up the peaks of Parisian society.”

While most chapters focus on one or other of these women, whose paths sometimes crossed, the narrative ranges backward and forward resulting in a lot of repetition, and occasionally, at least for this reader, some confusion between the characters: whose nude-seeming pale pink stockings so excited Guy de Maupassant, for example? Was it Mme Strauss or the Comtesse Grefulhe . . . or both? It does not seem like Laure de Chevigné’s style.

A rigorous edit could also have removed some of the clichés. Weber is very attached to the adjective “storied,” and “crowned heads” are never far away. Elsewhere inappropriate slanginess jars and mars the reading experience; “Fromental continued to work at a manic clip”; “audibly scare-quoting her buzzword”; “a cigar-puffing, hatchet-faced hulk of a matron” and so on and so forth. It is unfortunate that a book about stylishness should be so badly let down by the language.

Nevertheless, this is a fascinating read for anyone interested in fin-de –siècle Parisian society, though one could have wished for a bit more Proust and a little less Duchess.