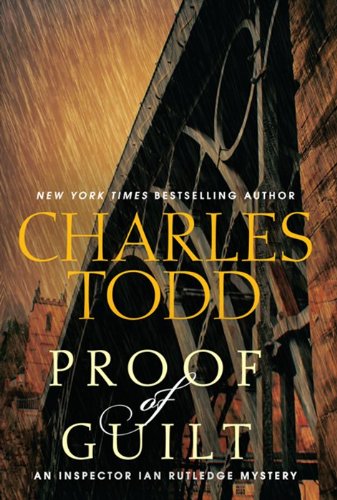 Charles Todd opens Proof of Guilt with a terrifying historical incident. In December 1916 a German submarine emerged from Funchal Harbor in Madeira, Portugal, bombarding the capital city for two hours. Luckily, for the firm of French, French, & Traynor, the oak casks holding the fortified wine that made Madeira famous and the firm wealthy did not suffer harm.

Great opening—but the rest of the book, while showing flashes of interesting situations and characters, can’t match the sweep of the first few pages.

Forward to the summer of 1920. An unidentified body has been run down by a motorcar, and Ian Rutledge is leading the investigation. The watch on the victim leads him to the wine importers; and Lewis French, the current head of the English enterprise, is missing.

But when Agnes French, a plain and bitter woman who has been kept out of the family business to nurse sickly parents, comes to identify the body, she swears it is not her brother Lewis. If Lewis is dead, she thinks the jilted fiancée is the likely culprit.

And the new acting chief superintendent likes this theory, encouraging Rutledge to run with it, even to the point of dismissing new information about a bloody incident in the past of the French family.

And what’s up with Mr. Belford? He happens to live on the street where the body is found and seems a tad too cool about the crime scenes.

The evidence is nil, and it’s tough to get a conviction on suspicion alone. Rutledge works like a terrier, sure that when he finds out the identity of the body the rest will follow.

His search leads him to a manor house whose owners employ ex-cons. Here’s one of the nice character profiles in the book: the lady of the house presumes her workers, so grateful to have a chance at life on the outside, would never harm her. Oops. As well, there seems less of Hamish in this outing. The voice in Rutledge’s head that is a manifestation of the man he ordered killed during the war. But does that mean Rutledge is on track to mental health? He keeps half falling in love with women he would never consider introducing to Hamish—he can’t even tell his sister.

Some of the secondary characters are very well drawn—Agnes French may very well have a point when she points out Rutledge can’t see the jilted finance as a murderer because she’s too pretty.

But with all the characters in this book, past and present, poor Ian seems lost, as if he sympathizes with the reader who has a hard time keeping up with all the leads that evaporate and the suspects who go missing.

Perhaps the author can provide a more artful mystery to set Rutledge on the road to recovery in his next novel.