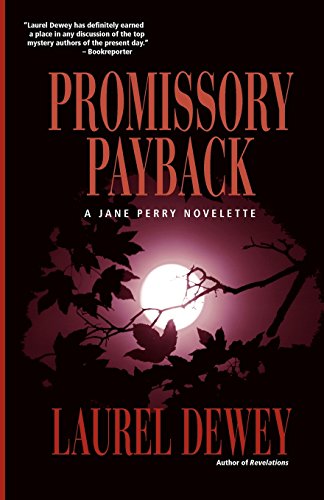 Tough-talking Homicide Detective Jane Perry takes a deep drag of her cigarette before firmly crushing it under the heel of her well-worn cowboy boot, in anticipation of viewing yet another homicide, which has tainted the high-end Denver suburb of Cherry Creek.

A recovering alcoholic with an abrasive disposition, Jane has a short-lived affair with yoga in an attempt to take the edge off; however, she quits when the rest of the class makes it clear that they don’t appreciate Jane’s loaded Glock riding shot-gun on her yoga mat.

A glimpse into the victim’s bedroom finds 62-year-old Carolyn Handel hog-tied, face down, with “Karma is a bitch” written in lipstick on her back. Cause of death is evidenced by the duct tape covering her nose and mouth.

Handel’s body had been discovered earlier that morning by her longtime friend, Laura Abernathy. After a short interview with Ms. Abernathy, Detective Perry learns that the deceased had conned many desperate people out of a lot of money; suffice it to say that none of them are sorry to hear about her torturous death. Therefore, Jane’s problem is not about finding someone with motive, but rather narrowing down the countless possibilities.

Despite its short length, Promissory Payback nicely establishes and develops the scene and the characters are well fleshed out. Part of a multibook, full-length series of novels, Promissory Payback delivers a plotline strong enough to stand on its own without requiring knowledge of the previous two titles, while simultaneously serving as an appetizer to satiate fans as they await the next novel in the series, scheduled to be released next year.

Additionally, Ms. Dewey’s succinct prose doesn’t skimp on quality, giving the reader enough time to invest in the story as well as get a good sense of Det. Jane Perry’s tough-as-nails exterior that, despite her obvious efforts, belies a scintilla of vulnerability. A faint air of mystery surrounding Det. Perry does act as motivation to read the previous books in order to learn more about the protagonist.

Because of the shortage of pages, the set-up and resolution take place in a truncated time span. Although the story doesn’t exactly feel rushed, there are moments that do feel too quick and convenient, utilized solely for the purpose of moving the story forward. Fortunately, the tactic wasn’t overtly used in a way that ultimately detracts from an overall enjoyment of the story.