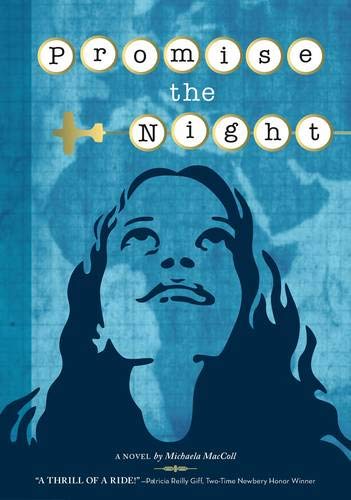 “Historical fiction can be the best education, because it engages people’s minds and hearts differently than the classroom—and often better. Promise the Night may be an entertaining yarn, but it won’t do young readers any favors in the learning department.”

Pioneers and explorers are cut from a different cloth than the rest of us. The energy and concentration they need to go where no one has gone before, to do what no one has done before—and survive—detracts from what’s needed for daily life among the ordinary.

This might be why genre fiction is so popular. There, heroes and heroines get to do amazing things and be well-balanced, lovable people! In reality, extreme achievers often suffer from tunnel vision and personality disorders. One such example may be the famous aviator Beryl Markham, subject of Michaela MacColl’s novel Promise the Night.

Technically, this novel is “faction” or “creative nonfiction.” The author states clearly in an afterword that she imagined a story about Beryl Markham’s childhood based upon the facts of her life. Okay, we’re good there, since Ms. MacColl studied “multidisciplinary history” at Ivy League colleges and has a parent who is a pilot. This combo makes it likely that the facts underlying the story are solid.

It appears, however, that the author is still in the learning stage of crafting novels, despite a title already under her belt. Promise the Night fails to deliver compelling characters to sympathize with, or a page-turning plot to get absorbed in, or even a credible world rich in sensory experience to escape to.

The real-life heroine that the author presumably admires is portrayed as a willfully disobedient, manipulative, dishonest, combative, obsessive, and unempathetic child (who occasionally does show moments of compassion, but otherwise routinely disrespects her loyal friends and battles everyone else, often resulting in harm to herself or other people and animals). Is this the role model that the average parents want for their kids?

The middle graders and young adults at whom this book is aimed will probably find the story a grand adventure. Wild animals in Africa! Unpunished defiance of authority! Running free and unwashed with the natives! Fighting and winning! Falling hard and getting dragged and stabbed and beaten up without serious injury!

But Promise the Night gets exhausting after a while for grown-ups, making one rather appreciative about never having met the real woman. The fictional child eventually learns to compromise, but only after deliberately getting expelled from school and returning home to cut a deal with her father. On her way out the classroom door, she grabs the teacher by the back of her dress and shakes her roughly in public humiliation.

Granted, the teacher struck her first, in an outburst typical of what Beryl incites in all situations where her people try to shoehorn her into the British social and educational institutions of the time (1912+). These are anathema to Beryl’s personality, so it’s no wonder she fights like a wildcat to escape what would destroy her soul. In those scenes, it’s easy to root for her, and enjoy her creative and usually outrageous acts.

But egad, what she gets away with! Then she grows up to become a successful racehorse trainer and to achieve international acclaim for daring deeds in the sky. Conservative folks who’ve spent their lives trying to function peacefully within their realities will have trouble swallowing this. Conversely, folks who have been repressed and boiling all their lives will find in Beryl a champion.

The question is: Was the real Beryl Markham like her fictional counterpart? Quite likely. But how did her radical childhood on the ground lead to a career in the air?

Promise the Night doesn’t tell us. Young Beryl never encounters an airplane over the course of the story. Her flying experience is inserted as mix of fabricated and quoted journal entries and interviews pertaining to her historic east-to-west Atlantic crossing in 1936.

The author’s point may be to show the before and after, focusing on a painful, formative year in the woman’s life that honed her arrogance into ambition; after all, a person needs indomitable will and blind faith in her abilities to succeed in the pioneer-and-explorer business—especially during an era when women weren’t allowed to do anything.

Much of child-Beryl’s story is her fight to exist on par with the boys in both African and British-colonial cultures, which the author peopled with cardboard characters who speak and act in clichés. In trying to write lean for younger readers, Ms. MacColl oversimplifies the entire novel.

While Ms. MacColl does sprinkle salient details throughout the narrative, they often aren’t enough to help readers visualize setting and follow choreography. This is particularly problematic in the book’s opening scene, where a leopard, a dog, and some humans act so far outside of normal that the anomalies need to be explained; ditto where an adult male lion mauls a little girl. Without thorough scene-setting details, the situations come off as implausible.

Promise the Night contains impossibilities, too, such as a horse turning its head far enough to yank a rider off its back by the shoulder with its teeth, and then hurl her into the air! Such incidents, along with incorrect lingo for the horse and horse racing worlds, suggest that this book was shortchanged in the editing department. Ms. MacColl’s presentation of animal behavior sometimes extends into fantasyland—which is not what an author, publisher, or reader wants from historical fiction.

Inaccuracy hurts readers by denying them the chance to learn about things they’ll likely never experience. Historical fiction can be the best education, because it engages people’s minds and hearts differently than the classroom—and often better. Promise the Night may be an entertaining yarn, but it won’t do young readers any favors in the learning department.

In the end, though, it always comes down to story. If you can suspend disbelief, as youngsters are prone to do, then the book presents the exploits of a ruthlessly determined girl who overcomes the obstacles, dangers, and enemies thrown constantly in her path to get what she wants in life. For Beryl Markham’s complete story, readers will need to consult source documents and formal biographies as well.