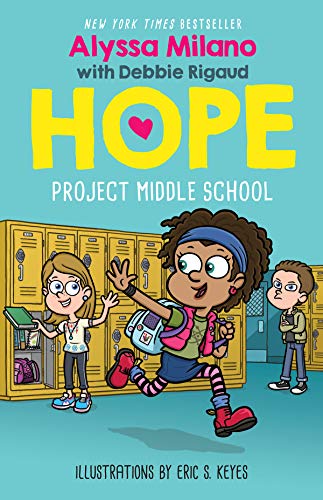 “Project Middle School is an engaging, thoughtful book examining many of the emotions of the beginning of middle school. Milano and Rigaud hit the high points of nerves, fears, and questions, and examine each with care and sensitivity.”

“Tomorrow I start sixth grade! Yes, me at JFK Middle School! My hypothesis is that life as I know it will change.”

Hope Roberts is super excited, but also nervous about starting this new chapter in her life. It will be amazing to begin everything new, but scary to be in an unfamiliar place, surrounded by new people. At least her best friend, Sam, will be there, too, even though they won’t have the same schedule. Hope has been accepted into the accelerated academic classes!

“This is, like, huge news. JFK Middle has the most impressive advanced program. Their science club teams run circles around everyone at the state science competitions. I’ve been a fan since the first grade. Since then, I’ve been working hard to make sure I get into their top-tier classes. And finally, now I’m in!”

But everything doesn’t go as planned when Hope shows up on the first day of school. An annoying boy named Connor makes fun of her, she volunteers to read in class and turns to the wrong page, and she mistakenly assumes a girl named Camila Rivera would be a whiz at Spanish. Worst of all it seems Sam has found new friends, maybe better ones. Hope calls her, using video.

‘And then some of her friends texted, found out what we were doing, and asked if they could come, too. Before I knew it, we had an instance audience!’”

Hope heads back to school, unsure how the next few days would go, after the disasters of the first. Fortunately, things aren’t so bad. She smooths things over with Camila, meets and likes Sam’s new friends, and goes to her first science club meeting. Those are all good times, but not everything is great.

The boys, especially Connor, don’t listen when the girls talk in class or at science club. Hope doesn’t get to be a part of the exciting team at science club. And Sam begins ghosting her. In addition, the animal shelter where Hope’s two dogs came from is going out of business because it’s running out of money.

How is Hope going to make this schoolyear work? Will she have to make all new friends? Will she learn to stand up for herself and make herself heard? Or is everything going to get ruined within the first few weeks of school?

Project Middle School is an engaging, thoughtful book examining many of the emotions of the beginning of middle school. Milano and Rigaud hit the high points of nerves, fears, and questions, and examine each with care and sensitivity. Recommended for new middle-schoolers and parents hoping to better understand their child’s world.