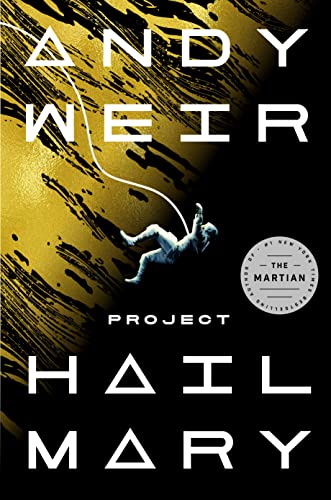 “Nobody writes optimistic science adventure as well as Andy Weir. Anyone who loved The Martian will adore Project Hail Mary.”

In Project Hail Mary, Andy Weir returns to the type of story he tells best: a lone man stranded in desperate circumstances who uses optimism, wit, and practical science to save the day. Project Hail Mary is every bit as entertaining, inspiring, and satisfying as The Martian, and Weir’s many fans will be delighted by this revival after his disappointing second novel, Artemis.

Ryland Grace wakes on a spaceship with no memory of where he is, how he got there, or who the two dead people on the ship with him are. The book tells two stories: Ryland’s present, as he solves the many scientific puzzles required for him to survive and fulfill his mission, and his past, as he slowly remembers the events that led to his presence there in the first place. Both stories are equally entertaining, and the backstory revelations nicely intertwine with the present action.

As in The Martian, Weir’s infectious love of science sizzles on every page, saving the day time and time again Apollo-13-style, full of stand-up-and-cheer moments. The concept of the alien life known as Astrophage is brilliantly unique and drives most of the problems and most of the creative solutions of the story. This is a bigger story than The Martian, with higher stakes, since the protagonist must not only save his own life but save the Earth as well.

Even trapped alone on a spaceship with amnesia and the whole human race at stake, Ryland narrates the story with a breezy, childlike enthusiasm, geeking out over scientific discoveries and describing terrifying events with wry humor. “The hull robot reaches out with some seriously telescoping arms. Not creepy at all. Five ever-growing alien robot arms reaching for my front door. No cause for alarm.”

If Project Hail Mary has any weaknesses, it is the handful of plot elements that stretch belief, but these are so entertaining that it’s hard to consider them false steps. For instance, in order to work together against annihilation, the governments of the Earth agree to give complete authority to a single person. Though not really credible, the power that person has to cut through all obstacles to get the job done is satisfying and fun to watch.

Similarly, Ryland learns an alien language with incredible ease, but the amusing banter he and the alien trade throughout the book is well worth the price of admission. The two often tease each other about anatomical differences, as when Ryland tells the alien that he looks like a spider, which everyone one earth hates and fears, and the alien responds, "Good. Proud. I am scary space monster. You are leaky space blob."

Despite the somewhat predictable set up (no reader doubts that the Earth will ultimately be saved), the book has two unexpected twists in store at the end. The first of these reveals a surprise about Ryland’s character and past; the second leads to an unexpected but satisfying conclusion. Nobody writes optimistic science adventure as well as Andy Weir. Anyone who loved The Martian will adore Project Hail Mary.