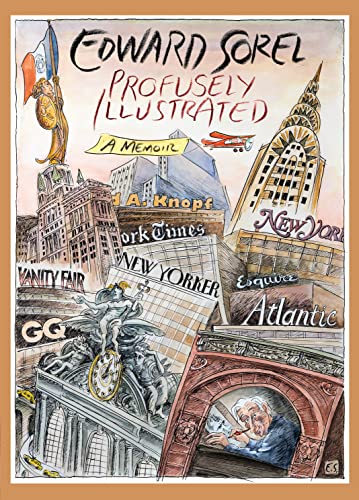 “This book is both witty and fierce. It’s a gift that keeps on giving, and we can only hope its nonagenarian author continues to do so as well.”

Edward Sorel’s new book is a collector’s item in the making: a visual as well as a verbal delight. The Author’s Note provides both intention and tone. Its opening assertion is: “This book serves two purposes. One of them is shamelessly self-serving: to save a few of my drawings from the oblivion that awaits most protest art and almost all magazine illustrations. The second is to offer an explanation for how the United States ended up with a racist thug in the White House.”

This second purpose may take some explaining, and takes up pages of text. “My belief is that it was made possible by the criminal acts committed by the twelve presidents who preceded Trump. To buttress my argument, I will digress from my narrative now and then to describe their crimes.”

A good percentage of the tale consists of that digression, and Sorel rehearses what he calls the crimes and shortcomings and failures of each president since Roosevelt; his point of view is unabashedly that of an old lefty, and the rags-to-riches aspect of his own life’s story stands in constant counterpoint to what he sees as national decline. Largely self-taught (though he profited from the examples of admired colleagues such as David Levine and Al Hirschfeld), the artist moved from penury and cold-water flats to featured front-page adulation for his book on Mary Astor in The New York Times Book Review. In any pantheon of artist-illustrators, he stands in the front row.

Sorel was born as Edward Schwartz at the start of the Depression—1929—in the Bronx. He adored his mother, disliked and distrusted his father, and changed his name to “Sorel” in honor of the protagonist of Stendahl’s The Red and the Black. His beautiful mother encouraged his creative bent, and much of Profusely Illustrated tracks the learning curve of mastery—from advertising illustrations to cartoon-like confessional panels to caricature and political engagement. E. L. Doctorow, assessing achievement, wrote “He is our Daumier, our Thomas Nast,” and such praise is justified and such a comparison earned. No artist of our time has been more incisive or eye-catching than Edward Sorel, and the reproductions of his work here are excellent throughout.

Much of the text is instructional. “Anybody can do fake Egyptian art, even a schlemiel who has forgotten how to draw . . . The ancient Egyptians outlined all their figures in black line, just as I did when I was a boy. Back then I would first draw my images in pencil on paper, and then go over the pencil lines with pen and waterproof India ink.” Or, “I was not any good at caricature. I could do likenesses, but caricature is something quite different. You have to know what facial features to exaggerate to make it comic. Some people have a natural gift for it. I didn’t.”

As these quotations suggest, the tone is personal and casual, often confessional, with a good deal of throat-clearing as the artist reconstructs his lengthy life. “Now where we? Yes, I remember. I had sold my first cartoon to The New Yorker . . .” It’s as though Sorel leafs through a series of illustrated albums, with the reader at his side and watching while he turns each page. So we move from youth to middle to old age chapter by chapter and drawing by drawing while the artist tells and shows us what he vividly recalls.

There are perhaps a hundred portraits of celebrities and politicians, mostly in full color and most often in community: a gathering of cabinet members or movie stars, each of them recognizable and always incisively limned. There’s a gallery of writers—Leo Tolstoy, Oscar Wilde, T. S. Eliot among them—each worth the price of admission or, in this case, purchase.  What Sorel privately remembers are friends and family members, apartments and houses in city and country, meals shared and parties attended—and, at fond length, his second wife Nancy, who died in 2015 and to whose enduring memory he dedicates the book.

Joseph Conrad famously wrote that “My task is, before all, to make you see.” An illustrated text is perfectly positioned to achieve that task—though it’s not quite fair to call this “an illustrated text,” no matter how numerous the reproductions or how foregrounded the art. Rather, there’s a seamless interplay between the things he writes about and the things he draws; the writer who rails at Richard Nixon, for example, is the painter who gives him a Pinocchio-like nose. We see a chorus-line of naked politicians—Reagan, Gorbachev, LBJ, et. al—wearing boots and doffing tophats and fondling large ballistic missiles between their upraised legs.

There are quite a few self-portraits here, and quite a few “quotations” from Old Master compositions, but no landscapes or still-lives or color-field abstractions—and one would have welcomed a paragraph or two as to the artist’s lack of interest in uninflected art. There are jobs lost and chances missed, but each cloud has a silver lining and by book’s end Sorel is much-honored and—strange word to use for one so self-deprecating and acerbic—revered. The arc of his career is upward-curving, always. “. . . it was awfully nice to pass a newsstand and see my magazine covers displayed. In the 1960s and ’70’s these included New York, The Atlantic Monthly, The Saturday Review, The Nation, Time, Fortune, Evergreen Review, National Lampoon, Esquire, The New York Times Magazine, Ramparts, Harper’s, Screw, and The Village Voice.”

Near the end of Profusely Illustrated. Sorel declares: “As I think I have already confessed, this book is essentially an attempt to save a few of my drawings from the oblivion that is the usual fate of ephemeral magazine art. It’s also a way to convince myself that spending a lifetime making funny pictures was not an entirely worthless endeavor.”

Decidedly not. This book is both witty and fierce. It’s a gift that keeps on giving, and we can only hope its nonagenarian author continues to do so as well.