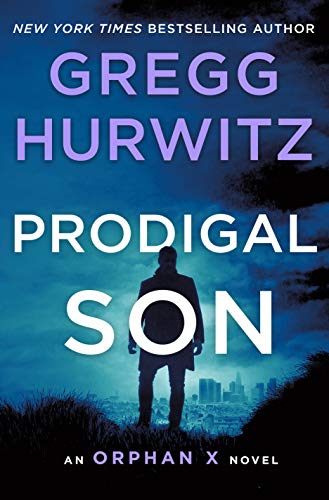 “Prodigal Son is further proof that Gregg Hurwitz has cornered the market on first-rate thrillers.”

Evan Smoak is out.

He’s done. Finished. No longer the Nowhere Man, whose mission is to help deserving people in desperate trouble with nowhere else to turn. After a wild and violent previous assignment, he accepted from the president of the United States an unofficial pardon for his many illegal acts in exchange for retirement. No more Orphan X, no more Nowhere Man, just Evan Smoak, normal, everyday, civilian nobody.

Someone keeps dialing 1-855-2-NOWHERE, but he ignores the calls until he can’t stand it anymore. When he finally answers, the woman on the other end claims to be his mother. She talks about how reluctant she was to have put him up for adoption when he was a baby. He cuts the connection.

Upset despite himself, he tracks her down in Buenos Aires and confronts her. Her name is Veronica LeGrande, and she has a mission for him. Skeptical, he agrees to look up Andrew Duran, someone she insists needs his help.

Once he accepts her request, he’s immediately sucked into a vortex of violence populated by a deadly brother-and-sister assassination team, a brilliant scientist whose artificial intelligence creations are as lethal as they are unobtrusive, and a client who rips away the mystery of Evan’s own past to put his very life on the line.

Prodigal Son is the sixth Orphan X novel by Gregg Hurwitz. Having blasted and clawed his way to the top of the thriller food chain on the strength of Evan Smoak’s nervy, guilt-edged adventures, Hurwitz is now attempting to add a new dimension to his intrepid hero, throwing him into the confusing dynamics that exist between a parent and a child.

After accepting that Veronica is indeed his mother (perhaps a little too quickly, given his initial suspicion that he was being played), Evan begins to work through what it means to have a family relationship with someone.

Looking around at his own connections to children, including young Orphan dropout Joey Morales and his downstairs neighbor Peter Hall, he chafes at his awkward attempts to mentor them as a substitute father while thinking at the same time about everything he missed without a mother.

It’s a good theme, and it fits with Evan’s overall self-consciousness and almost total lack of social skills. It’s by turns amusing and saddening to watch him struggle to be “normal.”

We know in our hearts that an entire lifetime of training as an Orphan, and his experiences as a brutally efficient Nowhere Man, have made him perfect for the role of an action hero, a crusader without the cape. We’re not really sure, as we read Prodigal Son, if it’s too late for him to make himself over into this other thing.

As always, Hurwitz maintains a breathless pace that moves us through the story without so much as a pit stop to freshen up and think about where we’re going. The book stays in our hand and the pages keep turning, as though imbued with a life of their own.

The secondary characters are a mixed bag. Young hacker Joey and her ridgeback, Dog, are as amusing as always, and Tommy the armorer is as gnarly as ever.

Veronica has a rough beginning, however, and comes off as rather whorish until Hurwitz takes us further into the back story and rounds off her edges. Likewise, Andrew Duran is a bit too stereotyped and two-dimensional. However, Evan’s glimpse of Andrew’s daughter through a half-closed door and the rapport that suddenly springs up between them is a sweet, sweet touch that’s not to be overlooked.

Nevertheless, Prodigal Son is further proof that Gregg Hurwitz has cornered the market on first-rate thrillers.

And, oh, wait. Did we mention that it ends with a devastating cliffhanger? It does! And you’re guaranteed to chew your nails off waiting for the next one.