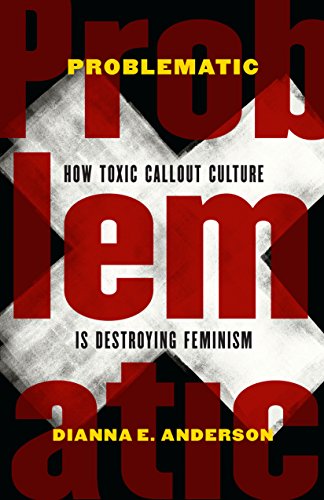 In this slim but intense volume Dianna E. Anderson analyzes and critiques feminist cultural criticism which in being hypercritical—as she sees it—runs the risk of making “the perfect the enemy of the good.” Anderson aims to remedy the “toxic culture of perfectionism” in feminist cultural criticism by “connecting modern criticism to existing feminist theory,” though that would suggest that current feminist theory is clear and comprehensive and embraced by all feminists, female and male? It can be argued that in proposing a better way forward for feminist critics and for feminism in general Anderson is simply guilty of the same errors. At the end of the book she decides that she herself might not be a feminist after all and concludes “I have been accused of worse.”

Though urging fellow feminist critics to be less prescriptive she seems to yearn for a healthy bit of prescription herself; why does she loathe Woody Allen, while raving about Roman Polanski, for example. Both are accused of similar crimes against underage girls. “It would be nice if terrible people only produced terrible work that we could dismiss . . . but it’s impossible to purify any and every piece of entertainment and culture from the taint of abuse.”

This is not a new dilemma of course. If pedophiles, rapists, and adulterers—not to mention thieves and murderers—were edited out the world’s museums would be empty.

When not wrestling with her conscience (“I was a theology and philosophy major and obsessed with the idea of Jesus as a man”) Anderson has some interesting, amusing, and even profound things to say about feminist criticism of some icons of popular culture, including Lena Dunham (“Lena Dunham is not a Pedophile: False Narratives and Scarlet Letters”), Harry Styles (Harry Styles is (Probably) Not a Creep: What Makes You Beautiful and the Male Gaze”), and Lady Gaga and Janelle Monae (“Mother Monster and Q.U.E.E.N”) both of whom “bring theory into the mainstream.”

Inevitably given the nature of the project and passage of time between writing of these individual chapters—which may have first appeared as separate reviews—and the publication of the book, some of these icons are already looking a bit faded, as well as tarnished by hypercritical feminist remarks.

One of the chapters that has held up best, and best illustrates the major point Anderson wants to make is “On My Money and Bitches Who Better Have It: How Modern Anticapitalists Fail to Account for Racial Politics of Black Artists” in which she analyzes black academic bell hooks’ criticism of Beyoncé’s capitalism as being insufficiently feminist.

Though the focus is on popular culture the very title of this volume seems to guarantee that it will only reach a specialist audience, which is unfortunate.

In the later chapters she arrives at the point of beginning to critique the traditional divisions and schisms in feminist theory itself, rather than its misplaced application through cultural criticism.

As she says “Critical thinking on the part of the individual is far more important than feminist perfection in the art we consume.” One must look forward to future essays along these lines. Meanwhile one must feel a little sorry for her father, despite his being given just a little leeway for independent thought; “When I speak to my dad about the fake news story he’s just read, it’s more important to me that he learns to question the things he reads online than that he agrees with me in this one instance.”