Prison by Any Other Name: The Harmful Consequences of Popular Reforms 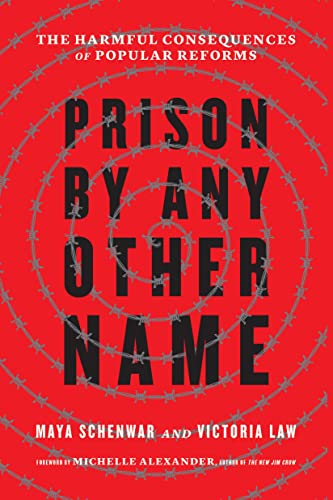 “In its best and final chapter, Prison by Any Other Name describes how every individual can help build a different sort of community and emergency-response system, one neighborhood block at a time.”

Maya Schenwar and Victoria Law’s Prison by Any Other Name is a devastating catalogue of the ways in which the machinery of American incarceration extends not only to neighborhoods but into private homes, schools, and to the human body, and how this primarily affects people of color, low-income families, and those whose sexuality or physical or mental health lands them outside the prevailing paradigm of what it means to be a full and deserving citizen.

For anyone who hasn’t read this book, it’s tempting to imagine that probation and house arrest represent humane alternatives to incarceration. After all, isn’t anything better than prison?

But the authors methodically show that so-called “alternatives” in fact punish not only those charged with (often vanishingly minor) crimes, but their families as well, and that the associated web of restrictions and exorbitant fees makes it nearly impossible for arrestees to serve their sentences and become free. Astonishingly, these revelations give a clear sense that jail is actually preferable to the present alternatives, which very often lead to traditional incarceration anyhow.

Readers who are new to this material may be especially surprised by the discussion of punishment via registry. Sex offender registries, which publicize the names as well as home addresses and photographs of people convicted of sex crimes, are popular across the political spectrum—surely, we might ask, they are essential for keeping people safe?

But the authors explore how registries do not accomplish what we might imagine. Since the vast majority of sexual abuse is not perpetrated by strangers but rather occurs within familial and social networks, public registries do little to deter such violence. Meanwhile these listings broadcast the identities of those deemed sexually deviant by the state—people who are typically poor and disproportionately nonwhite, and whose lives are ruined once they’re registered. One passage notes that, in the city of Milwaukee, there were so many restrictions regarding where registered offenders could live that there were only 55 addresses in the entire city where they—“they”—could reside. But some ordinances also make it illegal for registrants to stay in homeless shelters. Where, then, are they meant to go?

The answer is Somewhere Else, a concept that threads through every chapter of the book, as Schenwar and Law continually reflect on our ingrained notion that certain people are bad and must be put away.

Other important terms include “carceral citizen,” coined by law scholars Amanda Alexander and Reuben Jonathan Miller, which refers to those who live alongside free people but cannot access freedom for themselves, such as people imprisoned by ankle bracelet and electronic monitoring; and “chemical incarceration,” courtesy of scholar Erick Fabris, which refers to coerced psychiatric medicating.

In a book whose every page unsettles, the chapter on police in schools lands particularly hard. The authors wonder why officers, rather than counselors, handle school discipline. The answer: “For millions of youth . . . their schools have no counselors, social workers, or even nurses—only police.” Readers are unlikely to forget the image of a six-year-old Black girl being handcuffed by cops; or police in full riot gear storming into a Black boy’s home where he was alone with his grandmother, to search for a calculator stolen in his mostly white school.

Prison by Any Other Name also documents the policing of parenting itself, tracking how cuts to welfare programs lead to rising allegations of child maltreatment and then swelling foster care rolls. Indeed, state officials—as well as other “mandatory reporters”—are wont to allege neglect when the actual malady is poverty. A particularly chilling line: “Sometimes the police are called ‘social workers’ and the punishment is called ‘care.’”

You can feel the authors’ outrage inked into every page. Yet Prison by Any Other Name might have been more effective if it were written with a measure of dispassion, and an eye toward enlightening the skeptical. It feels instead like a text for the converted.

The most revelatory moment comes when Schenwar and Law point out that our so-called alternatives to incarceration reflect a paucity of imagination. What else besides a police state could our society be?

This is an abolitionist text, thus the authors’ aim is not to answer that question with any new form of social control. Instead, Prison By Any Other Name shows that much of what’s called crime is nothing of the sort, and makes a case for how investing in the resources people crave—quality housing, education, and jobs, as well as healthful foods, sports, and the arts—will go a long way toward reducing misbehavior, which is so often born of poverty.

But in a society free of prisons and jails, what about the rapists?

This is the question the authors reportedly receive most often. They point out that, when it comes to sexual violence, our current corrections system largely fails. Victims are often disbelieved and retraumatized by police, leading many other victims never to report their assault at all. Indeed, we do not currently have a good answer to sexual violence, and if we want to enact one, we’ll need to imagine something different. (The authors offer one compelling possibility.)

In its best and final chapter, Prison by Any Other Name describes how every individual can help build a different sort of community and emergency-response system, one neighborhood block at a time. Schenwar and Law note that this work isn’t easy. But, they say, if we want something other than state surveillance and ever-expanding modes of punishment, it’s on all of us to bring it forth.