The Princess and the Pig 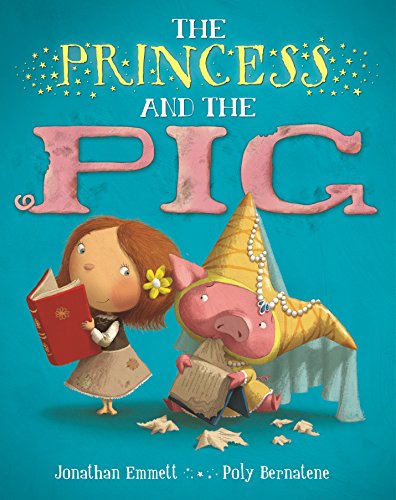 The Princess and the Pig is an interesting twist to a familiar fairy tale.

In a kingdom not so far away lived a poor farmer who was pulling his cart, full of both straw and a little piglet called Pigmella, near the king and queen’s castle. The queen had recently given birth to a baby girl and named her Priscilla.

In a bizarre twist of fate, the baby falls out of her bedroom tower, landing in the poor farmer’s cart, simultaneously projecting the piglet up into the air, landing it in the baby’s cradle.

The queen, seeing the piglet in her baby’s cradle thought that a wicked fairy cast a spell upon Priscilla, changing her into a piglet—because stuff like that happens in books all the time. It seemed a logical conclusion.

The farmer, realizing that there was a baby girl in the back of his cart instead of the piglet, thought he was given a blessing because he and his wife had no children of their own. So they raised Priscilla, and she was happy, while Pigmella had a hard time adjusting to royal life—for she certainly didn’t fit the princess mold.

When Priscilla grew into an adult, the wife heard some townspeople talk about the pig princess and realized what must have happened. Knowing the right thing to do, the farmer and his wife, though terribly sad, returned Priscilla to her rightful place on the throne. But does this tale ultimately turn out the way most fairy tales do?

The Princess and the Pig is a story that children ages of 4–8 will delight in: both for its familiarity and its twist. Author Emmett stays true to the humorous and unique style that readers come to expect from his books. The illustrations by Poly Bernatene are amazingly detailed, with bright colors and lots of whimsy that will cause children to laugh at the trouble the pig gets into at the castle.