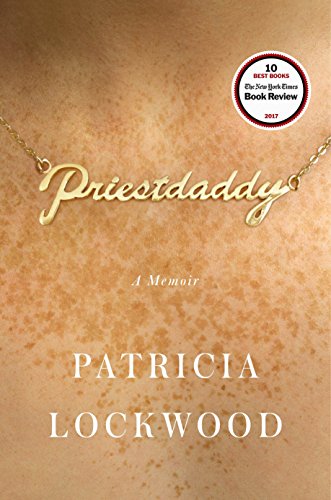 Every man of God has two religions, according to writer Patricia Lockwood: one belonging to heaven and the other to the world. Her own atheist-turned-Lutheran minister-turned-Catholic priest father’s are the Catholic Church, and nudity. Well, near-nudity, anyway.

His default off-duty position seems to be spread-eagled on the couch clad only in his underpants (formal white heralding a good mood; his most transparent boxer shorts indicating anger) watching action movies on television while cleaning one of his guns or coaxing strange sounds out of one of his electric guitars.

“I have almost no memories of him wearing pants,” she says, “and I have a lot of memories of his sitting me down for serious talks while leaning forward on his bare haunches. He just never wore pants on principle. We saw him in his [clerical] collar and we saw him in his underwear, and nothing ever in between.”

That her father is a married Catholic priest is almost as much of a shock as his habitual off-duty state of undress. An atheist for years, his journey to God began after he’d watched The Exorcist 72 times. Well, he’d joined the Navy and was confined to a nuclear submarine at the time so there probably wasn’t much else to do.

For her mother, his conversion was inevitable. Even though he’d been a smirking, Godless, slightly rebellious teenager when they met, she had no doubt religion was Greg Lockwood’s destiny.  “I knew I would make him a Catholic eventually,” she tells her daughter, “because the really bad ones always convert sooner or later. The worst bad boy of all was St. Paul, and he fell off his horse and ended up in the Bible.”

After his satanic movie binge, Greg disappeared into books and study for several years, eventually deciding he was meant for the Lutheran ministry: “He could argue the numbers off a clock and the print off a newspaper, and now he argued himself into orthodoxy,” his daughter explains.

Never quite at home among his “homey” parishioners, though, he moved further and further away from them until, as her mother realized, he was becoming Catholic.

“He was tired of grape juice. He wanted wine . . . Catholic priests by definition aren’t allowed to be married, but my father snuck past the definition while the dictionary was sleeping and was somehow ordained one anyway.”

It’s a rare phenomenon but not entirely unknown. Currently, there are around 200 married priests out of more than 400,000 in the Catholic Church worldwide. When an already married minister of another faith converts to Catholicism, he can apply to Rome for a special dispensation, which is what Greg Lockwood did (his case was approved by one Joseph Ratzinger, later to become Pope Benedict XVI, and later still to resign from his Catholic-in-chief role).

As if such an unconventional father wasn’t enough to imbue the young Patricia with an off-kilter take on the world, her mother, too, was an unusual parent—full of clichéd wisdom and waiting-for-disaster paranoia.

Instead of corroding Patricia’s soul, as it quite easily could have done, this strangely skewed upbringing appears only to have sharpened her perspective, not to mention her mad observational and writing skills. That she was dubbed the poet laureate of Twitter is almost no wonder. The medium is an art-form, she explains at one point to her skeptical mother: “. . . like sculpture, or honking the national anthem under your armpit.”

Clever, irreverent, profane and often downright rude, her words and explicit humor have garnered a huge and generous Twitter following. So generous, in fact, that when her husband Jason needed cripplingly expensive surgery for a rare eye condition, her Twitter fans rallied to the rescue, raising the money in less than 12 hours. “Connections forged in filth and nonsense are strong,” she explains.

After Jason’s surgery, the couple reluctantly moved in with her parents. “We are penniless and we are exhausted,” she explains, “and in the grand human tradition, we have thrown ourselves on the mercy of the church, which exists for me on this earth in an unusually patriarchal form. It walks, it cusses . . . It is currently shredding its guitar upstairs, across the hallway from the room where we will be staying for the foreseeable future.”

“It” is no symbolic or heavenly patriarch, of course. It is Patricia’s flesh-and-blood father, her “Priestdaddy”; an anachronistic, chauvinistic, hedonistic son-of-a-gun. A sort of one-man, ecclesiastical reality show anointing his family with guitar riffs and hairy-legged displays of selfishness.

Her poetry collections aside—Balloon Pop Outlaw Black and Motherland Fatherland Homelandsexuals, a New York Times Notable Book—Patricia Lockwood never intended to write about herself at any length. How could she? “not about what happened, and never about my most profound and deforming secrets—that I had been raised in an alternate reality, that my childhood sky was green . . . But how long can you outrun your subject when your subject is your own life?”