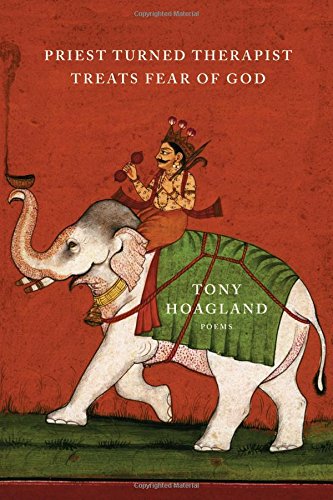 Tony Hoagland’s Priest Turned Therapist Treats Fear of God is a full of irony, satire, and humor. The poet writes of romance novels, hospital wards, marriage, Mexicans, Playboy, and Fox News, among several other oddities, to grant new life to pedestrian subjects, all of which are investigated, mocked, and often ridiculed. The reader experiences the world through the poet’s often sarcastic eyes, and is intentionally forced to commiserate—to admit the absurd.

Here are the first two stanzas of “The Romance of the Tree”: “It wasn’t the dream of an enormous spruce tree / to be turned into fifty reams of paper / then stacked and cut and bound into 4" X 6" format pages, // and printed with sentences / of a seething hot romance novel / called Summertime Nurses.” It’s clear where the poem is headed after these two stanzas. With startling images, the poet praises the beautiful tree, then elaborates on its destruction into a romance novel with Norwegian men; and then reflects on what was previously a creation of Eden, to create an ironic metaphor for our myopic stupidity.

Here’s the first stanza of “Nobility”: “In the 3,000 letters written by Virginia Wolf between 1930 and 1941, / she does not once express anxiety about the size of her rear-end.” The poem is about entitlement, and how we take things for granted—how we bundle life in a ball, focus on nonsense, and forget how serious life can be as we let is pass away.

“Cause of Death: Fox News” is an excellent example of this: arrogance. An old man focuses on ridiculous, implicitly fake, news stories about “illegal aliens,” “welfare moms,” and “health-care socialists” instead of the rank rotting away of his house and cancerous disease slowly killing him. The poem closes with the cable guy reclaiming the cable box and remote control “like a little coffin.” The poem creates a direct ironic metaphor: entertainment confuses reality.

“Couture” is constructed differently than the rest. It is not as verbose as the others, yet very striking in its simplicity. Here’s the entire poem: “If by mink / coat you mean / a soft, warm / garment / made from / the lives of / many other / creatures, / then, yeah, sure, / I guess you / could say I’m / wearing a / mink coat.” Notice the sarcastic commentary through definition. Vogue fashion is derived from destruction, from death. The poem is sardonic. In just 31 words Hoagland has created a metaphor for inhumanity.

Hoagland constructs his poems with ease. Even though poems include abstractions, such as beauty and anxiety, in addition to interjected philosophical questions, all poems are cohesive with doubt removed. Abstractions are defined by clear images. Questions are answered. The poems are not experimental, which is welcome among contemporary obscure poetry collections.

Priest Turned Therapist Treats Fear of God derives its power from honesty. It is necessary in a world of frivolous activity. All readers will enjoy its original, ironic, satirical, and often humorous poems.