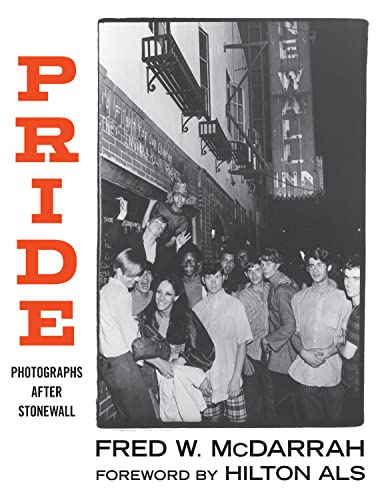 Pride: Photographs After Stonewall is an historical monument in freshly bound trade paperback. The book collects pictures of the New York gay scene from the late 1950s to the early 1990s, all taken by Fred W. McDarrah, who was a staff photographer for the Village Voice and the paper’s first picture editor. Though McDarrah wasn’t himself present at the Stonewall Riots that began June 28, 1969, his photos offer a sympathetic view of the gay activism of that era and the decades that followed.

The book was originally published in 1994, in honor of the 25th anniversary of the Stonewall Riots, and it functions as a kind of yearbook of the first quarter-century of pride marches and public activism. Its introductory essays by Lisa Johnston (author of Lesbian Nation) and Allen Ginsberg speak to the monumental nature of the collection.

Johnston’s essay offers a long-view assessment of “the uprising of lesbians and gay men” in 1969 as “a great watershed moment in both cultural history and the lives of many citizens. I think of Stonewall myself as an event dividing time in B.C. (before consciousness) and A.D. (after death—of the life before consciousness).” She points to the connections between gay rights activism and earlier feminist and civil rights activism. These are connections that were crucial at the time of original publication, but which seem obvious, even trite, two and a half decades later.

Ginsberg’s essays, perhaps not surprisingly, have aged better, if only because Ginsberg’s prose style is so intensely seductive. Ginsberg and McDarrah were contemporaries and apparently friends. The book includes a casual and intimate photo of Ginsberg and his then-partner Peter Orlovsky at home in the East Village in 1964. The poet’s affection for the photographer is clear: “[McDarrah has] paid humble attention year after year to his beat-curious intersection of journeymen [sic] journalist and cultural archivist. He has soulful instinct for the human ground under his special subjects. Though not gay, a hard-laboring family man himself, he’s made photo records of gay parades for decades—sign of a real artist’s inquisitive sympathy, intelligent democracy.”

Much of the book is devoted, unsurprisingly, to the pride parades of NYC. These are historically interesting but not always visually so. The black and white images strip away the glitter and ubiquitous rainbows in favor of crowd shots and human studies. Only a few signs and banners announce the purpose of the marches.

The yearbook nature of Pride is both its strength and its weakness. Though small changes have been made for the reissue (noting marriages and deaths of one or two prominent figures), Pride remains very much a product of its place and time. Only two photo sets from outside New York appear (one from a political rally in Texas, and a sequence of AIDS quilts in Washington, D.C.), and everyone who appears is unquestionably part of the New York gay “scene,” without any real consideration of the nature of that scene, and who was excluded from it.

The book’s lack of intersectional awareness is striking in this reissue. The term “intersectional” appears only in reference to Martha P. Johnson’s sex-worker activism. (Johnson’s crucial role in the Riots goes unmentioned.) Except in obvious “diversity” photos, most of the marchers pictured are white. One interviewee remarks, “When we first appeared as a minority group, it wasn’t legitimate. Color or ethnicity was valid, but sex didn’t count.” It’s a core theme throughout that gay activism has links to civil rights (black activism) and feminism, but gay rights are treated as functionally separate.

The construction of gay people as white, cisgender men, has long been a fundamental problem with pride. Pride’s reissue seems an ideal moment to reflect on the problems of those first 25 years, and the changes that came with the second 25, but instead the book has been left in its original form, without context or re-consideration.

The time lapse hasn’t been kind. A vision of pride that ends in 1993 is staggeringly dated. The black and white format reinforces the distance, but it’s conveyed, too, by the unfootnoted naming of figures famous in their time (Elizabeth Taylor, Rock Hudson, Andy Warhol) but unfamiliar to those who came of age since. The result is a kind of history book without historical commentary. Its interest now is primarily archival, or nostalgic for those who survived the era, with little to offer new arrivals seeking to understand the past.