The Price of Thirst: Global Inequality and the Coming Chaos 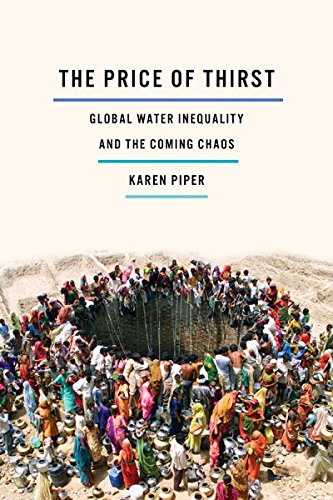 “Dr. Piper has written an eye-opening book about a hotly contested vital resource. . . . No hiding in libraries for this academic. . . . The outcome is a deeply moving exposé of how ordinary people’s lives can be altered irrevocably by corporate greed.”

Only one percent of the world’s water is drinkable, with the remainder stored in oceans and icecaps. And much of that one percent is not potable without costly treatment because of uncontrolled urbanization and heedless industrialization. Today, polluted water is the number one killer globally as countless millions, many of them children, succumb each year to water-borne diseases.

This situation is compounded by groundwater over-extraction, while melting ice testifies to anthropogenic climate change heralding a water crisis of unprecedented dimensions which may threaten the future of our species.

Multinational corporations, with the blessing of the World Bank and the International Monetary Fund (IMF), are pressuring governments to profit from catastrophe. Investment companies are calling water “the new oil” or the “new gold”--the most precious physical commodity, where drought is a business opportunity and thirst is political.

As the World Bank pushes privatization, governments are forced to convert a public resource essential to life to an exclusive individual asset that can be bought, sold, traded and banked without regard for human rights. “No money, no water” has become the mantra of the corporations which control the collection of fresh water supplies and manipulate world water markets.

“There’s Money in Thirst,” read a recent headline in the New York Times. And in a promotional video, the CEO of Nestlé, a leading purveyor of bottled water underscores the imperative of giving water a market value so that people learn that it has a price and must not be wasted. But for the fifth of the world’s population without access to clean water that cost is prohibitive—the price is thirst.

In The Price of Thirst: Global Water Inequality and the Coming Chaos, Dr. Karen Piper identifies the financial, institutional and political wheelers and dealers, past and present, in this little-known but crucial economic arena. She tours the world’s hot spots of water scarcity interviewing key stakeholders in schemes where corporations with mafia-like powers buy up supplies and turn off the taps of people who cannot pay.

In the process, Piper exposes the immense scope of the water crisis and shows how the stories she reports interconnect and constitute a man-made planetary emergency wherein neoliberal market “solutions” further exacerbate both water shortages and the gap between the world’s rich and poor.

The journey starts in the meeting halls of the World Water Forum, organized every three years by the World Water Council supposedly to solve the world’s water problems. Attendees include U.N. representatives, development bankers, energy barons, corporate CEOs, water ministers and heads of state from around the world.

Key delegates represent the handful of corporations who are banking on the world water crisis, including Suez, Veolia, Thames, American Water and Dow Chemicals, though the cast of actors is always shifting as new players, such as the Chinese, break into the top ten. However, the French companies Suez and Veolia still dominate the water world, in part because of their long experience with water management in former colonies. And the World Water Council’s membership has a cadre of engineers from these arenas giving an ex-colonial stamp to the water privatization strategies employed by this old boy’s network.

“To say the World Water Forum is exclusive would be an understatement. Inside, predominantly white men in blue suits drink champagne and eat caviar while deciding the future of . . . slum dwellers.”

From this island of elitist rhetoric Dr Piper rubs our noses in reality as she visits water privatization projects around the world and uncovers corporate-government collusion that is creating a “water bubble.”

We begin in the Americas comparing two kinds of water marketing in the U.S. and Chile, both considered models by the World Bank though “successful” only relative to more visible privatization failures and achieved at enormous social and environmental cost.

In California, billionaires hoard water in water banks awarded to them by the government, exacerbating the effects of a ten-year drought, while settlement and agricultural expansion continue at the expense of ecosystems, resource sustainability, jobs, and public health.

Chile privatized 100% of its water under the Pinochet dictatorship gifting the country’s water to de facto users. At that time, the largest holder was the state-owned electric company so dam construction for hydropower was the priority. The outcome was monopoly, water hoarding, violations of indigenous rights, and environmental disaster as the dammed rivers negatively impact the slowing Circumpolar Current in a region considered a global driver of climate change.

In India and South Africa, Dr. Piper examines how dams and diversion systems built for colonial elites are used to send water to private corporations. For example, India’s Ganges River is being diverted to the Suez company water treatment facility in Delhi despite widespread protests.

In South Africa, although the post-apartheid constitution enshrined water as a permanent right for all, the government was forced by the IMF to privatize water supplies creating a new apartheid of water rights. In Johannesburg, rich whites enjoy manicured lawns and sparkling pools while a private water company installed pre-paid water meters in poor black neighborhoods. Few could pay. Cholera broke out. Riots ensued.

In Iraq, the destruction of water infrastructure in the war was followed by pressure to extend water management contracts to European and American companies. In Egypt riots turned to revolution after President Mubarak gave massive handouts of land and water to his cronies. The push to privatize the economy has contributed to burgeoning Islamic insurgency in this volatile region.

Despite this dismal record of water privatization around the world, which even the World Bank is beginning to admit, Dr. Piper ends her book on a somewhat optimistic note. “What is clear from all these examples is that public pushback against water privatization has worked and companies are now in retreat, at least temporarily.”

She gives examples of effective popular resistance by environmental organizations, indigenous groups, and anti-colonial movements which have destabilized corporate control. And she outlines some potential solutions such as recognition and revival of indigenous water-knowledge systems and stopping the flow of landless peoples to the cities.  A water-secure world can be re-imagined.

Dr. Piper has written an eye-opening book about a hotly contested vital resource. She balances her post-colonial theoretical foundation with ground truthing in the best traditions of participant-observation and investigative reporting. No hiding in libraries for this academic. While conducting field work, her plane dodged missile strikes, revolutions were brewing, a glacier collapsed on her trail and she drove through riots. Most sad and most telling, she lost part of her hearing in a police attack on protestors while observing a G-20 meeting in Pittsburgh.

The outcome is a deeply moving exposé of how ordinary people’s lives can be altered irrevocably by corporate greed. Only two things detract from readability. Although Dr. Piper makes a point of translating development discourse into plain English, a glossary of technical terms and buzzwords would have been useful. In addition, because her meticulous research is documented in detailed end notes, it can be rather slow reading for those who want to flesh out the stories.