The Prey of Gods 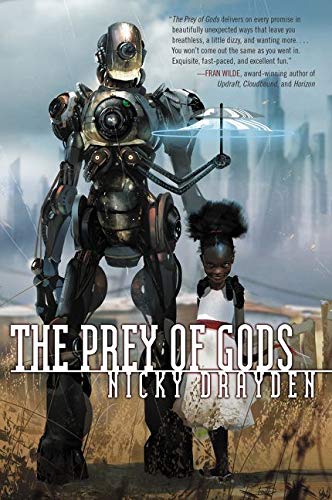 “Drayden has knocked it out of the park with this novel. . . . an excellent piece of fiction that is levels above any of the summer reads coming out.”

"The three men stand like terrified statues in their movers' overalls, all lined up against the back wall of her apartment. Slowly, Sydney locks the door and lingers so their minds go to all the dark places. Anticipation is the worst kind of torture."

Humor is hard to nail down. Many authors try and fail. Spectacularly. Add in the attempt to create a novel that bends genres, with a mix of scifi, fantasy, paranormal, and mythology, and the risk of failure rises exponentially. Then set that novel in a near future South Africa with characters as varied as a gay teenager, a cross-dressing politician with dreams of diva stardom, a young child learning to be a goddess, and an old goddess struggling to survive as a nail tech, and, well . . .

Not an easy target to hit.

Except, Nicky Drayden does just that. Not only does she hit the target, she blows it away. With a perfect mix of speculative genius, horror, and satire, Drayden brings all of her varied characters to life in a way that allows the humor to come through without mocking any of the genres she mixes to create her setting and narrative.

The above quote is a perfect example. It reads like horror, as it should, but within the context of the story it is a perfect example of one of the characters simply struggling to survive and get by in a world that has forgotten the power and magic that created her. The reader will feel sorry for her victims, but at the same time they will feel sorry for Sydney because she almost doesn't have a choice. Almost.

The Prey of Gods goes well beyond humor or satire. It delves deep into love and loss, sexual identity and personal identity, how anyone finds their way in a world that refuses to slow down, refuses to look at what came before it without contempt, refuses to take a breath and let everyone simply be.

In short, Drayden has knocked it out of the park with this novel. There is something for everyone and it blends so many archetypes and genres that it would be hard for any reader not to find some aspect they absolutely love. Prey of Gods is an excellent piece of fiction that is levels above any of the summer reads coming out.