The Presidents: Noted Historians on the Lives and Leadership of America's Best—and Worst—Chief Executives 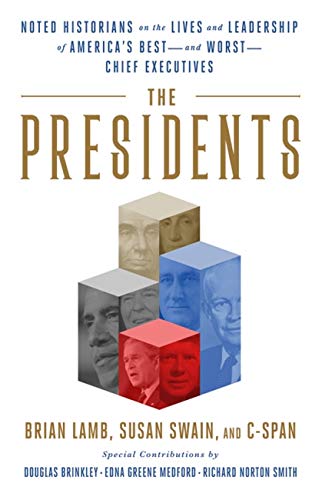 “[That] The Presidents makes a fast, engrossing read comes as no surprise . . . It works on so many levels including for a general audience.”

In the new trend in books of historical essays, authors do not compose mini encyclopedic dissertations but try instead for specific thoughts and arguments. Each chapter in The Presidents comes from an "interview with a nationally recognized presidential historian or biographer," an example of new ideas about ideas, not a chronological list of facts.

The presidents are rated from best to worst by a survey of "ninety-one presidential historians and observers of the presidency." Three "nationally recognized presidential historians" who "contributed their scholarship to C-SPAN projects" wrote a special separate chapter on Donald Trump. Edna Greene Medford concludes with "The Presidency, National Identity, and Equal Justice."

The reader immediately moves to the appendix to see the overall ratings of the presidents. That Reagan does not come in lower and Monroe higher, for example, seems odd, but the ratings come from "qualities of presidential leadership identified" by C-SPAN's three consulting historians. Those standards are "public persuasion, crisis management, economic management, moral authority, international relations, administrative skills, relations with Congress, vision/setting the agenda, pursued equal justice for all, and performance within the context of the times.

That list makes judgement difficult as a president could succeed in one area during one part of his administration and fail elsewhere. William Henry Harrison died within weeks of becoming president. Abraham Lincoln has suffered over-analysis, with much myth. What could anyone write in one chapter about either President Roosevelt? Andrew Jackson seems beyond any objective evaluation. How Richard Nixon's presidency ended overshadows its accomplishments.

The historians share parts of themselves. Ron Chernow "would love for contemporary Americans to share the excitement that Washington's contemporaries" felt. Brinkley writes of Theodore Roosevelt having "fights about everything that he believed in." Lou Cannon believes that Ronald Reagan "had a view of this country's goodness."

Much in this work deals with public perception and what the authors sought to achieve in their respective books. They generally speak more informally than they wrote in their biographies. The Presidents includes a "Complete List of Featured Books."

"These accounts vary as much as the men who have inhabited the office," however, making objectively compiling such a list difficult. Historian David Herbert Donald remembered even John F. Kennedy as having "voiced his unhappiness over the glib methodology employed by some historians in rating his predecessors."

That quote comes from historian Richard Norton Smith's essay on the long history of revisionism among the public and scholars on views of the individual presidents. He likens it to an imaginary "parlor game" of Ranking the Presidents, "history as argument without end." Highly respected scholar Douglas Brinkley follows with a history of rating presidents.

That The Presidents makes a fast, engrossing read comes as no surprise, the C-SPAN staff did extensive editing to rewrite the interviews as chapters. It works on so many levels including for a general audience along with C-SPAN's many series such American Presidents. The Presidents also serves the scholarship community that created it for a popular audience.

C-SPAN is directing any royalties from the sale of this book to the nonprofit C-SPAN Education Foundation, which supports the creation of history and civics teaching materials for middle school and high school teachers and their students