Presidential Elections and Majority Rule: The Rise, Demise, and Potential Restoration of the Jeffersonian Electoral College 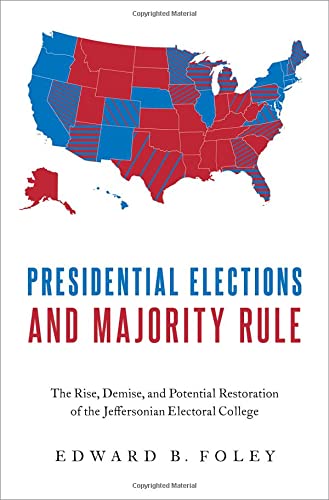 “Foley does a brilliant job of simplifying a complex issue, helping lay people to understand what the Electoral College is and why it is a critical component of our federal republic. It’s got its problems, he says, but it should be fixed rather than abandoned.”

For better or worse, the President of the United States has never been elected by direct popular vote but always by the Electoral College. With two elections in the 21st century that put the popular vote loser in the White House, a hue and cry has been raised across the country that maybe it’s time to do away with the system.

In his new book Presidential Elections and Majority Rule: The Rise, Demise, and Potential Restoration of the Jeffersonian Electoral College, author Edward Foley argues convincingly that, while it may be time to tinker with the system, it still serves a valuable purpose.

According to Foley, the Electoral College, included in the Constitution of 1787 and later modified via the 12th Amendment in 1803 following the “debacle of 1800,” is intended to reflect that the United States is a federal republic, made up of individual states each requiring a distinct voice in elections, and not a single monolithic “democracy” to be ruled by an overall popular vote.

That works just fine in two-party elections, where the winner necessarily obtains a majority of the vote. But the advent of third- (and sometimes fourth-) party candidates, and winner-take-all electoral systems within most states regardless of whether the winner attained a majority, has wrecked the system. The result has been numerous elections in which the winner not only failed to obtain that “majority of majorities,” but occasionally elected presidents who didn’t even achieve a plurality of the popular vote.

The initial system, as embodied in the Constitution of 1787, permitted each state to implement its own method of selecting electors, who then cast two equally weighted votes for president. The only restriction was that at least one of those votes had to be for a candidate from a different state than the electors.

The intent of the electors casting those votes was obviously to support a team of Jefferson as president and Burr as vice president. But since the votes were of equal weight, the result was a tie, which threw the election to the House of Representatives to decide. The House ultimately selected Jefferson, but the election created a “challenge . . .  to redesign the Electoral College in a way that would assure the translation of that popular majority into an Electoral College victory.”

The result was the 12th Amendment, which kept the two-vote system and the prohibition against electors casting both votes for candidates from their home state but differentiated the two votes as being for president and vice president. Nicely done, and it produced multiple “clear Jeffersonian winners” over the years.

But it also produced a smaller number of “dubious Jeffersonian winners,” as well as “three clear instances in which the Electoral College winner failed to achieve the compound majority-of-majorities necessary for Jeffersonian legitimacy.”

Then there are three failures, which are elections in which not only did the winner fail to achieve a majority vote in enough states to provide an electoral victory, the ultimate winner would have lost the election if there had been a head-to-head contest.

The first failure was the election of 1844, in which James Polk defeated Henry Clay. Third-party abolitionist candidate James Birney siphoned away enough votes from Clay to cost him New York’s 36 electoral votes, and that provided Polk his margin of victory. According to the author, Birney voters would have overwhelmingly supported Clay had Birney not been in the race.

The second failure was 1884, when Grover Cleveland defeated James Blaine thanks to the presence of two minor-party candidates in the race who, Foley contends, took votes away from Blaine, and New York again was the pivotal state. The third failure was 2000, with Florida in play, and Ralph Nader, according to the author, cost Al Gore the election to George Bush.

Foley rates the 2016 election merely as “dubious,” rather than a failure. Even though Hillary Clinton won the popular vote by nearly three million, and Donald Trump failed to achieve a majority of the vote in seven states that provided him 107 electoral votes, “it is not clear that Trump would have won six of these seven states if only he and Hillary Clinton had been on the ballot . . . .”

Foley does a brilliant job of simplifying a complex issue, helping lay people to understand what the Electoral College is and why it is a critical component of our federal republic. It’s got its problems, he says, but it should be fixed rather than abandoned. “American democracy should become more genuinely democratic, to avoid self-inflicted wounds caused by the accidental election of presidents lacking the majority support of the electorate.”

In his final chapter, Foley proposes several alternatives to fix the system, but which must be made on the state level. A federal level fix would require a constitutional amendment, with all the headaches that long, drawn out process would require, so changing the way states select their electors, and administer their votes, is most feasible.

He proposes that individual states require that a candidate must receive a majority of that state’s popular vote in order to receive all the electoral votes, then implement a system to determine how that can be achieved. Anything short of that, he says, results in an Electoral College majority that is “meaningless insofar as it is based on a series of winner-take-all outcomes at the state level.”

The goal, he says, quoting James Holland Campbell, “is to rehabilitate this ‘first principle of our Government,’ so that defective procedures never again ‘defeat the will of the majority’ in an ‘election of the Chief Magistrate.’” And that should take us back to the Jeffersonian ideal of a “majority of majorities.”