The Presidency of Barack Obama: A First Historical Assessment 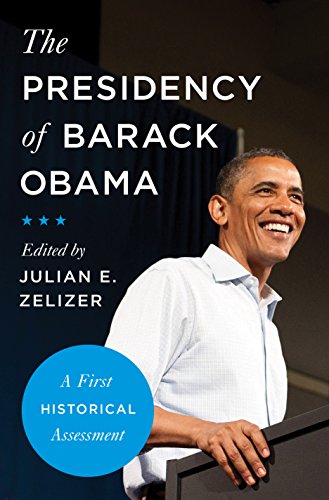 “The Presidency of Barack Obama: A First Historical Assessment is a welcome and useful first look by first-rate historians at the still very incompletely excavated record of the historic Obama White House years.”

This new collection of essays looking back on the Barack Obama White House is an interesting reflection on very recent presidential history from the top of the United States History profession. All but three of the volume’s 17 contributors are established historians at elite United States universities (the only exceptions are a Princeton sociologist, a University of Virginia law professor, and a Princeton-minted post-doctoral fellow). Five of the contributors are employed by Princeton University, the volume’s publisher.

The essayists range from slightly left-of-center to liberal centrist, consistent with the standard ideological profile of the liberal arts and social sciences professoriate. The volume’s editor, Princeton historian Julian Zelizer, reports that nearly all the contributors were in “a state of shock” when Trump triumphed over Hillary Clinton, who Zelizer (reflecting the meritocratic ideology of the professional class) revealingly calls “someone with one of the most impressive resume’s imaginable.”

Despite this shared political and upper-echelon academic and professional class ground, however, the contributors are not without differences on how to assess Obama’s presidential record and legacy.  Seven of the essayists write about the Obama presidency with liberal approval:

Three of the essays are neutral on the Obama record:

The Presidency of Barack Obama: A First Historical Assessment will not find very many readers outside the groves of elite academia. A riveting page-turner it is not.

Neither the editor nor any of his contributors show the slightest awareness that many writers on the Left (this reviewer included) predicted precisely both the (not) “surprisingly” conservative” trajectory of the Obama presidency quite early on and the results of that presidency (including divergent insurgencies both left and right).

Goluboff and Schragger are wrong to see Obama in 2008 as a “Harvard-trained lawyer” who “thought social change [was] more likely to come from the grassroots.’’ Obama shed that belief before he went to Harvard. That abandonment was part of why he left community organizing and applied to the top law school in the first place.

Kazin is on flimsy ground to see a resurgent Left without an antiwar movement under Obama. No Left worth its salt can emerge without coming into conscious confrontation with the U.S. global military empire, a great source of inequality, authoritarianism, and oppression at home and abroad.

Olmsted would be less surprised by Obama’s murderous “counterterrorism” if she had closely read candidate Obama’s foreign policy writings and speeches. She might want to think of Obama’s kill program as just plain terrorist, not counterterrorist, consistent with Noam Chomsky’s 2015 description of Obama’s drone program as “the most extreme terrorist campaign of modern times.”

These criticisms aside, The Presidency of Barack Obama: A First Historical Assessment is a welcome and useful first look by first-rate historians at the still very incompletely excavated record of the historic Obama White House years. It will surely provide a touchstone for future and longer looks back by historians and others in coming years.