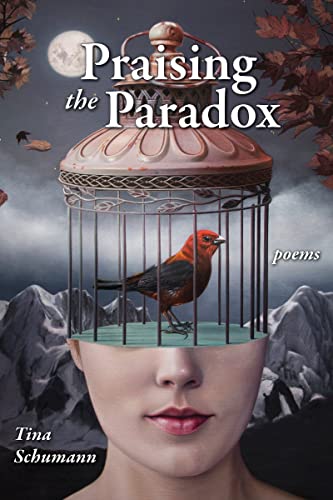 Poetic culture still grapples with the question, what is the proper subject for poetry? The mid-20th century revolutions in literary culture exploded the range of acceptable “poetic” subjects, so that the domestic world, wild sex, chemical experimentation, body politics, race politics, and the discomforts of geography moved in among the great subjects of nature, love, and loss. Poets staked out territories and grappled with new realms of subjective experience.

In the midst of that expansion, purists defended the practice of “occasional” poetry: poems written in engagement or observation of a particular hour or day, arising from the moment and encapsulating the momentary human experience. This, they suggested, is the heart of the poetry, and all of the humanities: an exploration of the humanness of ordinary life.

Tina Schumann’s Praising the Paradox dives into that human pool. Her poem “Random Winter Day” underscores the premise of its title, emphasizing the arbitrary nature of her chosen poetic moment. The events are small, unmonumental: “All afternoon we have been waiting / for snow the weatherman promised / at noon. Unreliable though he is / we plied the pantry with potatoes and bread, / milk, and a chicken crouched in the freezer.”

Here is the ordinary moment, but the ordinary is not poetic in and of itself. Surely, something more is expected, some metaphor or insight bringing transmutation into sudden, profound knowledge. Ideally, language is hard at work, too. If poetry is the densest form of language, then a poem’s language should be vivid, carefully chosen. It should offer up more than seems possible in its minimal, ascetic lines.

Schumann’s poems struggle with this task of elevation. While she lovingly catalogues the moment, her codas of potential insight show less engagement. Her study of schoolchildren freed from the classroom at lunch, trails frustratingly away: “the jab and flow of that girl’s cotton skirt / making more of this material world / than either of us / will ever know.”

Here is the moment where the writing teacher, or the workshop community steps in. They ask, What is the name of this unknown thing? The poet shrugs. The questioner persists, No, tell me. Another shrug. The poem is what it is. Live with it.

We sigh in frustration. The poet smiles, certain of her art, and goes back to her daily practice.

This is, perhaps, the genesis of Praising the Paradox. Schumann knows her poetry. She has sudden, vivid images. She cultivates the daily habit of writing. The number of poems marking a day, or a season, in straight observation, suggests a diary; it’s a real diary, though, written for the writer, and less thoughtfully revised than a reader might desire.

That lack of revision is striking. It appears in moments of unexpected cliché. “Facing the Rain” begins promisingly, with the assertion, “It was cats and dogs this morning,” which suggests a charming deconstruction of the idiom into individual animals. Yet by the second stanza, the cats are “asleep in a heap,” surrendered to juvenile assonance that needed more care to elevate it beyond the laxity of the moment.

Praising the Paradox isn’t a bad book. There are bad poets afoot, and Schumann isn’t one of them. But it’s a book that mostly suggests the need for a little encouragement to do more. To dig deeper and revise more intimately. To extend the metaphors and carve away the excess language.

The collection’s finest poem is the poem that goes farthest. “Another Voyage” abandons the rain-washed streets of middle America to explore the story of a man who tells his family he is going on a voyage, then walls himself into his house and commits suicide. Schumann’s persona is fully engaged, and suddenly the poem is concrete, terrifying, engaging: “If, with the final news we become / more lucent than the living, more radiant / and steady, then I’ll welcome the / foremen in me. I’ll study the structure / of houses, scaffolding / schematics and footprints. / The soft spread of mortar to brick. / The architecture of forever.”