Practically Radical: Not-So-Crazy Ways to Transform Your Company, Shake Up Your Industry, and Challenge Yourself 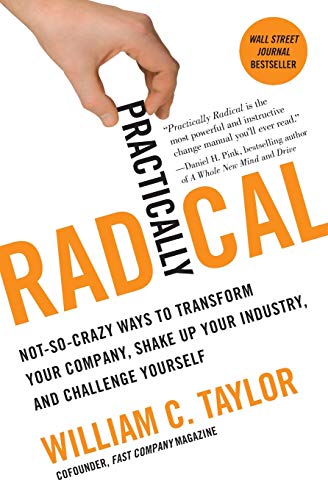 Author William C. Taylor, as a cofounder and founding editor of the magazine Fast Company, is one of the superstars of modern entrepreneurship, and it shows in his latest book, Practically Radical: Not-So-Crazy Ways to Transform Your Company, Shake Up Your Industry, and Challenge Yourself.

Practically Radical is a follow-up to Taylor’s Mavericks at Work, but can more rightly be seen as a successor to Jim Collins’ seminal book, Good to Great. Unlike a number of other recent works on entrepreneurship and business, Taylor returns to the rigorous and detailed analysis that Collins presented a decade earlier in G2G. However, unlike Collins, who performed a paired-analysis of a great and not-so-great company in his book, Taylor presents a best-of-breed approach while still offering up his findings in a compelling and enthusiastic manner.

It’s this enthusiasm that shines through and becomes infectious—the type of enthusiasm that makes a reader devour the book and then return for seconds. Taylor shows the usual suspects of modern entrepreneurship, such as NetFlix and Zappos, while also linking up international companies such as Brazil’s Magazine Luiza and Canada’s London Drugs. But as he did with Fast Company, Taylor knows that business is not a monolithic assemblage of brick and mortar but an extension of humanity.

This understanding is summarized in a title to one chapter, “One for all and all for one!”—the Companies with the Strongest Emotions Win. Here, the author compellingly argues that businesses are a collection of people with their own hopes and passions, and he highlights this understanding with an account of lesser known DaVita Inc, a fast-growing dialysis company whose CEO explains, “We don’t do return-on-investment calculations for this stuff; that’s like calculating ROI for having a nicer family. We have flipped the means and the ends. Having an adequately profitable business is the means. Building a real community of human beings is the end.” As it turns out for DaVita, they get both.

Taylor also summarizes other remarkable accounts that are not specifically business in nature but reflect the best that emotion can offer for business, such as the search for the USS Grunion, a lost submarine from World War II.

It’s one thing to write a touchy-feely optimistic business book, quite another to do it with the level of academic intensity that Taylor does in Practically Radical. He’s written a number of books previously, but this is his first solo venture. And if Practically Radical is any indication of what his writing is like on his own, Taylor deserves a permanent spot on your list of authors to follow.