Power: Why Some People Have It and Others Don't 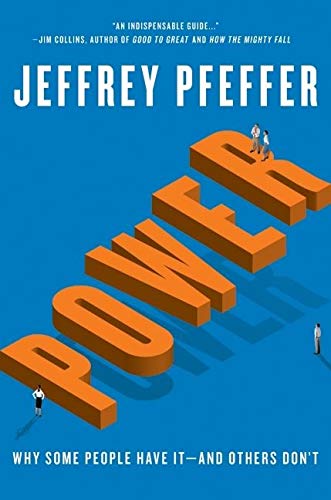 This year’s Slap-In-The-Face-Get-A-Grip-Bub Award for business books goes to Jeffrey Pfeffer, business professor at Stanford and author of nine volumes on organization dynamics.

Pfeffer makes no bones about it: You can be the lead sled dog and, after a long day on the tundra, get the best morsels at the campfire or you can be the stressed-out, exhausted pooch watching the keesters of your brethren in the front harnesses. Your choice, Bowser.

Pfeffer, thankfully, uses his perch in the ivory tower not to dazzle us with empirical studies that elicit “ahs” from the Society of Human Resources Executives. Rather, his advice is crisp, gently merciless and practical about the realities of hierarchies, be they within corporations, prisons, hospitals or monasteries.

His most valuable advice for the unwashed is simple–your job performance has as much influence on your ultimate prosperity as shouting does on the weather. Instead, Pfeffer’s research suggests that what sets apart people who have power—and hold on to it—is pure political skill. They understand that power is a reward that can be won with savvy relationship skills, and is usually not given for hard work and strong performance.

Of course, most people will automatically say: “I know that.” Sure you do, you sharp cookie, you. But beyond that facile reaction, few understand or properly undertake what is necessary to be politically adept. Most hobble themselves before even toeing the start line. However, for the rare birds beginning their careers, in a rut, or simply open to learning more about themselves, Power is the book for you.

Pfeffer even has a wonderful insight if you’re looking for work. The group you should not turn to when networking for employment are your friends and family, a set of strong ties who probably think like you anyway and therefore provide redundant information. It’s the casual acquaintances, your weak ties (the ones about which your second wife Dolores quietly asks, “Why do you keep track of those people?”), who are not only more likely to link you to new people, organizations, and information but will even comply with your small requests.

• If you want to be universally liked and play by the rules, don’t count on attaining any power.
• Anger is a powerful tool—it will get you attention and provide a patina of authority.
• Um, regarding that anger thing, don’t direct it at your boss or he’ll probably toss you through the metaphorical (if not literal) window. Instead, flatter, be helpful and fill the leadership vacuum when the opportunity arises—and bask in the warm rays of your next job performance review.
• Finally, whoever controls the resources controls the power in a group. Get them.

Don’t like these bromides? Fine, don’t play. Your company won’t weep because plenty of others there will be competing, like it or not.

What’s particularly refreshing about Pfeffer’s approach, though, is that he sees both sides of the power equation. Yes, it does corrupt, and he suggests ways to prevent it while still holding on to its reins.

And yes, he’s read all that hopeful literature about the wisdom of crowds and joys of team building. His rejoinder is simple: “Take care of yourself—don’t expect justice.”