The Power of Sports: Media and Spectacle in American Culture (Postmillennial Pop) 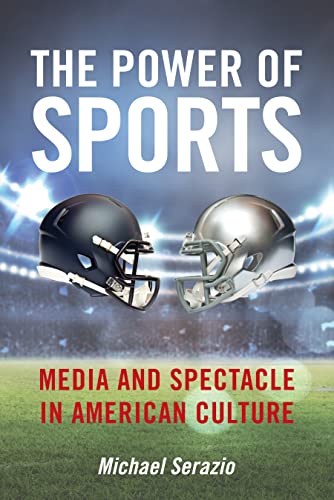 “Michael Serazio has done a remarkable analysis, and this book offers any student of American culture and sport much to contemplate.”

Few would doubt that sports are a significant force in American culture. Michael Serazio clearly believes that sports, as delivered through the media, wields great power over the culture. It is a ubiquitous presence, certainly, but it should be remembered that everyone is not enthralled by sports, and, for all its outsized visibility, sports are not a major force in the American or world economy. For those of us obsessed by some facet of Sportsworld, this can easily be forgotten.

However, sports are a powerful force in the lives of many, and its messages are spread far and wide through various forms of media, which themselves have grown at an exponential pace in the past half century. Michael Serazio, award-winning journalist and a member of the Department of Communication at Boston College, is well-position to analyze the sports spectacle. While the major focus of The Power of Sports, as suggested in the subtitle, is on American sports and media, Serazio moves across the globe for effective comparisons that support his analysis.

Setting the stage, Serazio begins with the personal and with the attachments that sports pass across generations, noting how these attachments are used in the media to form a bond within the sports community. It is natural that some of this section deals with ESPN and the growing availability of live sports that is found in the sporting experience explains much of its power. Sports are in the moment, unscripted and unedited, and in the television world it was among the first forms of reality programming.

What is found in The Power of Sports will not come as a great revelation to anyone who has reflected upon sports and their many cultural functions in America. What this study offers is a full frontal examination of a multitude of areas with both a historical and contemporary focus that at times is dazzling. What it offers the sports fan who approaches sports as pure entertainment or escape is a revelation that should be savored, but likely will be rejected.

Serazio opens with a focus on the relationship between journalism and sports from the early days of magazines and newspapers, and then goes on to the growth of radio, then television, and finally the social media explosion. Passing through each stage, both sports and journalism have been transformed in myriad ways, which are analyzed with considerable skill.

The commercialization of sports has been a powerful force as they have grown in size and popularity. The impact of commercialism is now a subject of considerable attention. This takes the focus beyond the United States and into the international theater. It also leads to an analysis of marketing and merchandizing on the national and global stage.

As a cultural phenomenon, sports give powerful expression to the gendered aspects of culture. Masculinity is at its center with endless ramifications for men, women, and all other non-binary categories. This can be difficult terrain for the analyst and certainly contains a number of intellectual and cultural landscapes to be explored and explained. Serazio is both successful and instructive on these issues.

Serazio deals with labor issues in modern sports, and this leads into discussions of race and protest, with the Kaepernick case having the highest visibility in recent times. He then goes well past this one case and beyond the troubled waters of the National Football League. Not surprisingly this leads to a sophisticated discussion of patriotism and nationalism.

All this being said, The Power of Sports suffers at times from the tendency of academics to over-intellectualize their analysis and get lost in jargon. The language of sociology and psychology do not always enlighten and, in fact, often unnecessarily obscure meaning while being off-putting to the reader.

Serazio also falls into the trap of discussing sports as religion. This has become commonplace, but, unfortunately, it misses fundamental differences between those two institutions. In providing compensation for the decline of religion in American life, sports have not been transformed into a religion, although it is often easy to think so, especially in the heat of the sports moment.

Michael Serazio has done a remarkable analysis, and this book offers any student of American culture and sport much to contemplate.