The Power of Positive Deviance: How Unlikely Innovators Solve the World's Toughest Problems 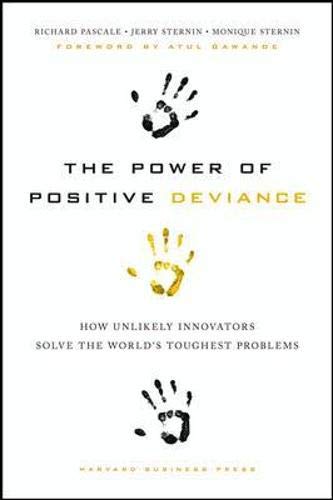 After an economic meltdown, a decade of war in the Middle East, and an Old Testament geyser in the gulf, we face a fork in the road of our national journey: Are our institutions—be they government, corporate, religious, or nonprofit—still serving us well and, if not, how should they change?
This is more than red-state blue-state, liberal-versus-conservative, cable TV fodder. Rather, it reflects a nagging ambivalence toward academia, bureaucrats, and leaders who claim to have the “big” ideas, administer giant programs, and play the politics that to many have become hopeless.

Such doubts ultimately derive from the way we address problems at all levels across society. Will a 2,500-page healthcare bill really address the costs and gaps of medical treatment for three-hundred million Americans? Can the Earth’s climate be corrected with a regime that penalizes energy usage? Can a religion regain trust in the wake of priestly scandal?

More to the point, who is empowered to create such solutions?

This last question lies at the heart of The Power of Positive Deviance: How Unlikely Innovators Solve the World’s Toughest Problems. The business professor and consultant Richard Pascale, along with the husband-wife team of Jerry and Monique Sternin, present a problem-solving approach that emphasizes three “Cs”—community, commitment and communication—to resolve seemingly intractable issues.

Contrast that with our current governance model, which historian Walter Russell Mead calls a gnostocracy—the rule of experts. In a perfect gnostocracy, the smartest, best-educated people make all the decisions for the rest of us. Hence, William F. Buckley’s oft-stated preference to be ruled by the first three-hundred names in the Cambridge telephone directory than by the faculty of Harvard.

In their way, Pascale and the Sternins open that phone book and seek those who have found their own solutions—a bottoms-up approach in synch with our Toquevillian bloodlines.

Also, by flipping problem perceptions on their head—addressing not “why are Vietnamese babies malnourished?” but rather “why are some of the babies at optimal weight?”—solution seekers can cut to the chase. The key is to focus on those local outliers, the “positive deviants,” who have already figured out the solution and identify the secrets of their success. As important, communities are then mobilized based on their norms and culture to adopt the same habits and behaviors.

Whether it is in the corridors of Merck or the houses of Egyptian villages, nobody likes change imposed from the outside— regardless of its viability. As formidable an obstacle: Leaders hate to give up power. Thus, much of The Power of Positive Deviance is devoted to how a community must work to teach and change itself—and that means each individual having a stake in a successful outcome.

At first glance, Pascale and the Sternins may seem to be late passengers on the “Gladwell-Freakanomics” bandwagon—the literature of individual genius and quirky economics. Far from it. Their book is closer in spirit to James Surowiecki’s The Wisdom of Crowds and Glenn Harlan Reynolds’s An Army of Davids, but it takes a deeper dive with impressive results. The authors’ case studies, though sometimes related in a breathless tone (particularly in the chapter on curbing the practice of female circumcision in Egypt), are candid about the power and limitations of their method.

But the successes they document are striking: a 30–50 percent reduction in childhood malnutrition in communities across forty-one countries; a significant prevention of antibiotic resistant bacteria in three U.S. hospitals; and a 30-percent decrease in girl trafficking in poor villages in East Java. Even better, Pascale and the Sternins present their methodology in a way any layperson can understand.

For a society fraught with flawed adversarial (lawsuits, politics, media) and top-down (executive, regulatory, legislative) approaches to systemic challenges, The Power of Positive Deviance deserves more than a cursory glance—it should be required reading for the powers that be. How about a copy delivered to the in-box of every Congressman and cabinet secretary for starters?