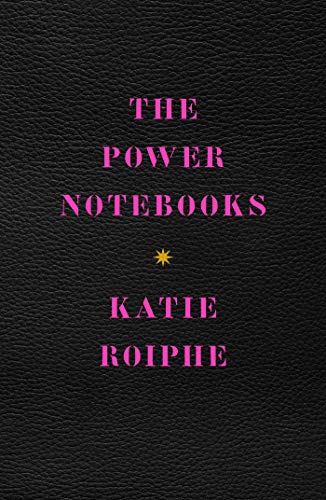 Katie Roiphe is noted for her trenchant and often controversial views on all things feminist. In a Harper’s magazine article of 2018 she questioned the validity of fears of male abuse expressed by #MeToo voices. Perhaps she was trying to make a point that the institutions we all inherit are the problem, and not the individuals, but separating the “personal” from the “political” is not an easy task as she must know better than most.

In The Power Notebooks Roiphe focuses rather on the “personal” side of this equation using the word “power” not in the sense of “geopolitical power, or socio-economic power or electoral power or power in the broad Foucauldian sense” but to focus “on the little things: the dynamics between people (friends strangers, intimates)” dynamics that, as she acknowledges, also reflect larger power relations. This approach springs from her recognition that “we like the idea of powerful women, (but)we don’t like powerful women themselves.” In order to shed light on this conundrum she has reached deep inside herself, risking “confusion, self-contempt, conflict,” which is at odds with her usual self-confident and analytical approach.

“The notebooks required me to do things I otherwise never let myself do: admit weakness, give up control, acknowledge doubt, have no idea where I am going.”

In short the notebooks are the jottings of the private thoughts (on gender relations and feminism) of a very public woman. The photo at the beginning of the book of Simone de Beauvoir pinning up her hair in the bathroom, shot from the behind and wearing only her high heels perhaps expresses Roiphe’s state of undress in this publication, compared with her usual presentation of public self.

The book is organized into fragmentary but readable short chapters under such headings as Birth, Wedding, Car, Mother, Cigarettes, Age Difference and the names of some of the powerful women writers who have preoccupied her; Rebecca West, Janet Malcolm, Jean Rhys, Sylvia Plath and of course Simone de Beauvoir. All are crisply written and often amusing though some chapters seem to be conventional reviews and interviews, repurposed into looser Power Notebook mode. This is understandable but undermines the message that these are “informal musings and notes.” The men in Roiphe’s life are given some minor walk-on parts.

Roiphe states in closing that while the notebooks no longer demand new entries every morning, they will never be finished. Yet writing them has freed her to live with “tolerances” and contradictions” of her life. This is a book to divide opinion. Readers who are devoted to Roiphe as “a cultural lightening rod” may find these revelations revelatory. Non-fans may find the whole project a bit self-important, though most could probably agree that this is a nicely produced, well-written, short memoir for the bedside table to be dipped into before sleep.