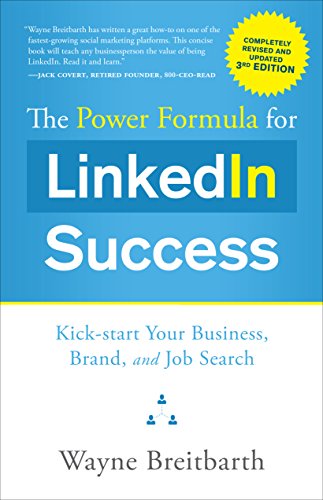 In The Power Formula for Linkedin Success: Kick-Start Your Business, Brand, and Job Search, author Wayne Breitbarth deems a user’s profile on the online business networking site LinkedIn a “résumé on steroids.” In doing so, Breitbarth has encapsulated in a nutshell the entirety of LinkedIn’s value proposition.

For those of you unfamiliar with LinkedIn, it is an online social site that allows you to track and be tracked by business colleagues in the hopes of future business interactions. A more pedestrian way of explaining Linkedin is that it’s an interactive online resume—Facebook for business.

It seems a bit peculiar that an author might state that he “has been a LinkedIn trainer since early 2009,” but there’s no denying that his methodical approach to LinkedIn proceeds both logically and meticulously.

In Breitbarth’s slim 176-page book, he delineates exactly how to leverage the power of the site while providing clear guidance to avoiding many common pitfalls. He even provides a six-week, two-hour-per-week startup and maintenance plan to create and exploit your LinkedIn presence—your online work profile.

With short paragraphs that explain concepts simply and concisely, copious illustrations and screenshots, and a helpful summary at the end of each chapter, The Power Formula doesn’t read like a first book, which this is for Breitbarth. Instead, it is polished and comprehensive enough to provide an excellent starting base for social media newbies. Seasoned LinkedIn users may gain less from it, but it certainly deserves a look.

The only fault with the book actually isn’t something idiosyncratic to Breitbarth or The Power Formula, but rather something with the nature of any Internet site, which is that LinkedIn could change tomorrow; however, it’s doubtful that the vast majority of what the author recommends for this iteration of LinkedIn wouldn’t be transferable to any future versions of the site.

If you are contemplating using LinkedIn, and you should, Breitbarth’s debut is highly recommended as a serious starting point. If you are an experienced LinkedIn user, it still deserves a look—if only to fill in some gaps your online business presence may have.