Power Up: How Smart Women Win in the New Economy 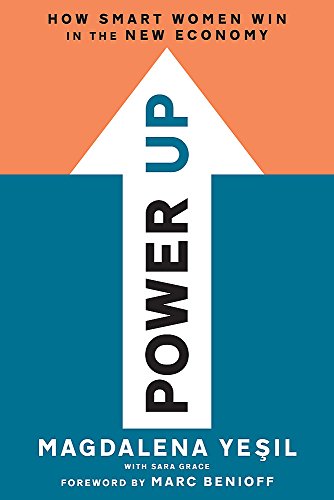 Magdalena Yesil’s Power Up is the newest book in the tradition of Sheryl Sandberg’s Lean In, in which powerful women who have spent decades downplaying their gender in order to reach the top of the business world decide to “come out” as female (yes, that’s a quote) and publish a women’s-interest book about the gender dynamics that they for so long hoped to ignore.

Yesil is now a wildly successful entrepreneur-turned-investor, but in these pages she admits that she spent her early career striving to put men at ease with her female-ness so she could apply her astonishing intellect and ambition to the tech industry.

She also regretfully acknowledges that she could have done more along the way to clear a path for other women coming up behind her. And that is Power Up’s raison d’être; this book is her better-late-than-never instruction manual to help younger women survive, and perhaps thrive, in business and technology.

In a slim tome that toggles between stories and quotes from successful women in Silicon Valley, platitudes, and genuinely useful advice, Yesil covers intrapreneurship and entrepreneurship, salary negotiation, sexual harassment, the “bitch” bind, effective networking, and the wicked challenge of being ambitious and a mom.

Yesil threads her own story through each chapter, a narrative approach that would be ideal but for her indomitable character and dumbfounding resume, which frequently make the book sound like a brag sheet. You can’t help but think that, if it takes this degree of fortitude to succeed as a woman in tech, then most women—who are mere mortals by comparison—are screwed.

Consider, for instance, that Yesil left her native Turkey after high school to attend college in the U.S., an option that was only available to her because she had successfully convinced a fisherman to give her a free, early-morning ride across the waters of the Bosphorus so she could take her SATs. That is, she is a go-getter of practically inhuman proportion.

After graduating from Stanford and working as an engineer, Yesil later became the first investor in Salesforce, a company that is now so successful that its new tower is the tallest building in the San Francisco skyline. Yesil credits her background as preparing her for the trials she faced along the path to such astronomical success: Because she grew up in Turkey as an Armenian—a minority group that had been the target of an ethnic cleansing—being a woman in Silicon Valley felt like a piece of cake. Many readers will not find this to be particularly heartening news.

Still, Yesil candidly acknowledges that the challenges facing women in technology are real. It’s an industry in which workplaces are not only predominantly male but sometimes entirely male, save for the topless dancers at the company conference (a true story from Yesil’s first employer). With that for a backdrop, she sets out to offer practical advice. And in many cases she does just that.

She recommends carefully vetting any potential employer for its culture. She aptly describes self-promotion—an essential for anyone who wants to rise in the ranks—as a matter of thoughtful communication, in which you “tell a compelling story with [your]self in an award-winning role.”

She advises readers on how to make allies of the men around them, and to leverage those allies in otherwise hostile situations. Like any entrepreneur, she recommends ways of creating opportunity where none exist. She offers some smart rejoinders to repel sexual harassment. And, in what may be the most actionable advice of all, she lays out a proactive approach to negotiating a workable schedule while starting a family.

But Yesil is primarily speaking to a privileged subset of women. When she discusses balancing the demands of entrepreneurship with having a young family, she admits that all the women she knows who attempt to do both have the financial wherewithal to hire a full-time nanny. She offers advice to help women make it home by six thirty, but she calls this a professional “limitation,” and she doesn’t bother to discuss a schedule that would allow women to pick up their kids from school; that, it’s clear, is a nonstarter.

To her credit, Yesil isn’t sugarcoating matters. She reveals a heartbreaking moment when she overheard her then 13-year-old son and his friend speculate about what kind of women they would marry: They would have wives “who were home all the time and were reliable cooks, unlike their own mothers.” Throughout her life Yesil had skillfully dodged the gender prejudice that was everywhere around her—only to hear from her own son that Mommy would be better off staying home and baking cookies.

Indeed, Yesil isn’t going to tell you that you can have it all. And she quotes venture capitalist Sonja Perkins who “tells women who want to make it in any kind of business to reset their expectations to ‘hard.’” Nor does Yesil place the whole burden of gender politics on women; she exhorts companies and leaders, as well as ordinary employees, to do their part to create an inclusive environment. That’s spot-on.

As Yesil admits, though, she didn’t concern herself with inclusivity back when she was climbing the ranks. Instead she played down her gender and worked three times as hard as the men; only after achieving unassailable success did she stop to reach her hand back to other women. It was a logical approach. But if everyone follows that strategy, little will ever change.