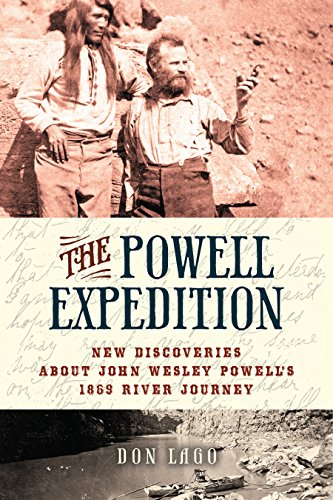 “Lago is a storyteller, and his accessible, sprightly writing style makes what could be a mind-numbing collection of facts read like an adventure yarn.”

Books about expeditions or explorations of unknown places are essentially mysteries. Why were they undertaken? What kind of person wants to explore terrifying unknowable regions? What happened on the expedition, and what did they learn? What happened to the people afterward? The ones who survived, that is.

Author Don Lago acknowledges this theme and uses it to great storytelling advantage in his new book about John Wesley Powell’s famous 1869 running of the Colorado River. Knowing that he has both Wallace Stegner and Donald Worcester looking over his shoulder, Lago turns the familiar account inside out and tells it from multiple and unique perspectives. He also takes what has often been just a footnote in the Powell story and makes it the center of his narrative: What happened to the three men who left the expedition, took off on foot, and were never seen again?

Lago makes clear from his Introduction that his aim is to give proper recognition to the men he feels Powell ignored in the years after the river journey: the crew members. Each of these men—John Sumner, George Bradley, William Hawkins, Andy Hall and, to a lesser extent, Powell’s own brother Walter—get the full biographical treatment, or as much treatment as can be dragged out of the historical record (Frank Goodman eluded him completely).

But he saves most of his research skills for the three men who departed at Separation Rapid: Oramel Howland, Seneca Howland, and Bill Dunn. Their fate drives the narrative, for as Lago dissects and analyzes the lives of all of Powell’s crew, he is looking for clues as to why the Howlands and Dunn would have left the dangerous water for the equally perilous desert. This is the central mystery of the book, and like a thriller writer, Lago saves his conclusions for the very end, dropping clues into various tributaries along the way.

Lago’s aforementioned research skills are formidable. Even when he hits an archival wall and can’t penetrate further into a person or an event, he takes what he has and forms a number of conclusions. Sometimes these conclusions contradict each other, but he doesn’t hesitate to present all of them. This is useful when you know you can’t fully solve a historical mystery, but it is also just good scholarship.

The other strength of this book is its voice. Lago is a storyteller, and his accessible, sprightly writing style makes what could be a mind-numbing collection of facts read like an adventure yarn. He throws in some of his own fact-finding journey for good measure, and at the appropriate places. But there’s eloquence too, especially when he places Powell and his men into the larger story of how mid-19th century expeditions fueled America’s warped dream of Manifest Destiny.

At the end of the book Lago uses the 1960 Disney film Ten Who Dared to explain how and why science nerd John Wesley Powell and his river voyage would soon personify the new inclusive movements of the coming decade. The film was a flop, but Lago says it was simply ahead of its time. “Yet Walt Disney’s selection of a disabled, science-loving, nature-loving, Indian-friendly, abolitionist and environmentalist as a Disney hero might have meant the Disney did, after all, have his finger on the pulse of history, for Americans were on the verge of a national soul-searching that would redefine national mythology and values substantially.”

Lago’s obvious fascination with his subject matter made him go down a few rabbit holes, the only quibbles with this excellent book. It’s delightful to know that the Howland brothers had a genealogical connection to both the Donner Party and Howland Island, where Amelia Earhart had hoped to land before disappearing. However, these facts belong in a footnote, not in two additional chapters which break up the rhythm of the narrative.

And it was sloppy, in his description of early merchants Michael and Joseph Goldwater, to write that future senator and presidential candidate Barry Goldwater was “their” grandson. (Michael was his grandfather.)

Rabbit holes aside, Lago’s book is a welcome addition to literature not only on John Wesley Powell, but to the expanding shelves of books devoted to exploration all over the world. A testament, perhaps, to how much humans are drawn to the name that Powell himself gave to the Grand Canyon: the Great Unknown.

Lynn Downey's most recent book is Levi Strauss: The Man Who Gave Blue Jeans to the World, winner of the 2016 Foreword Indie Silver Medal for Biography. She has published articles and book reviews in California History, The Public Historian, and elsewhere and is a historical and archival consultant.