Postmodern Winemaking: Rethinking the Modern Science of an Ancient Craft 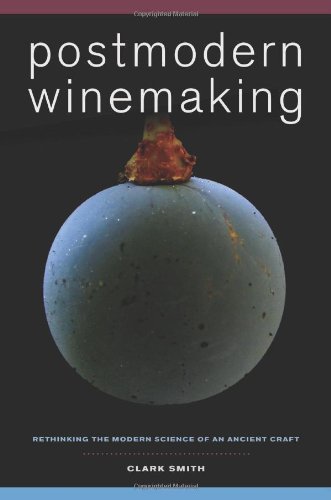 “. . . not for the beginning wine drinker; but for those interested in getting more down in the weeds on winemaking . . .”

“My favorite corollary of Murphy’s Law states that ‘nothing is impossible for the man who doesn’t have to do it himself.’ The real truth is that all wines, and I mean all wines, become distinctive through artifice. That’s what winemakers do, don’t you know.”
—Clark Smith

We last met Clark Smith as one of the major characters in David Darlington’s An Ideal Wine, reviewed here in 2011. Now he has written his own book in which he can set forth his views in one place.

He had been writing short pieces on his website postmodernwinemaking.com, and columns in the trade publication Wines and Vines as well as other places. This book stitches these musings together, sometimes nearly verbatim, sometimes reworked.

Unlike most wine writers and wine critics, who presume to tell winemakers how to make wine, Clark Smith has actually made wine, starting at R. H. Phillips in 1983 after getting degrees in enology at UC Davis, and has been a consultant to over 1,000 wineries, founding Vinovation in 1992 and WineSmith a year later.

Mr. Smith’s greatest contribution to winemaking has been the use of a process known as Reverse Osmosis (RO) to remove Volatile Acidity (VA) from wine and to adjust the alcohol content of wine also through RO. He holds a patent (recently expired) on this process.

VA is caused by bacteria, which gets into the grapes when birds start pecking at the ripe fruit, damaging the grapes. Birds turn out to be connoisseurs, who tend to go for the best grapes. Fermentation of these grapes produces acetic acid and ethyl acetate, aka vinegar. Mr. Smith figured out how to filter these molecules out of the wine.

Mr. Smith also uses RO to remove alcohol from wine. He would conduct trials in which he would set out many glasses of the same wine, with the alcohol adjusted to between, for example, 13.0 and 14.5 percent in 0.1 percent increments. He discovered that there are definitely sweet spots for the right alcohol balance, but it was not a bell curve falling away from the best level. Rather wine that was 0.1 percent higher or lower alcohol than the sweet spot tasted worse than wine that was 0.5 percent different. It was like harmonics in music.

Mr. Smith also espouses technologies such as Micro Oxygenation (MOx), a process that involves continuously dissolving pure oxygen gas into wine, and Flash Détente, as process that involves heating the grapes and pumping them into a vacuum chamber. As a result, Mr. Smith is often demonized by purists and Natural Wine advocates, who claim that they prefer winemakers who do not “manipulate” the wine. Mr. Smith responds to these critics with the quote that opens this review.

But Clark Smith is just the opposite of someone interested in making flawless wine that does well in the Safeway wine aisle. Rather, he is a proponent of “postmodern winemaking.” What he strives for most in wine is “soulfulness.” He writes:

“Postmodern winemaking calls apparent progress in modern enology continually into question, and in so doing resurrects some key notions that have gotten lost in the shuffle:

• “Wines depend upon good structure for their soulfulness. The deviation from our cherished solution-based chemistry model is a pretty good working definition of quality.

• “As in all foods, a complex natural ecology provides distinctive and soulful character to our wines that we could never hope to manufacture. Distinctive flavors of place require a living soil nurtured through a cautious approach to herbicides and pesticides.

The Natural Wine advocate Alice Feiring, whose book Naked Wine we reviewed in 2011, appears numerous times in this book. She and Clark Smith might agree that wine should be soulful but disagree on how to get there.

Very telling is a comment by someone tasting Mr. Smith’s Faux Chablis, a California Chardonnay in which the alcohol has been adjusted down to the French Chablis-like levels of 12.9% alcohol, and tasting the same wine before alcohol adjustment, at 14.8% alcohol. He thought that the alcohol-adjusted wine had “truer terroir expression” but that the unadjusted wine was “more authentic.”

Most wine drinkers are more interested in drinking wines that taste good than in drinking “authentic” wines. And Clark Smith strives for that.

As mentioned, most of the content of Postmodern Winemaking had been published before in article form. As a consequence, the chapters tend to be standalone, not flowing from the previous chapter. As is often the case in a collection of articles from one writer, the same thought, often close to the same sentence, often appear several times in the course of the book.

Also, since the articles tended to be first published in trade publications, the book is aimed mostly at Mr. Smith’s fellow wine makers and others in the business, and much of the writing is at a level that makes most sense to them while not interesting the general reader. Discussions of methods of tannin adjustment are rough going, and they tend to take up much of the beginning of the book with the “philosophy” section that more of us can appreciate rewarding the reader who makes it to the end of the book.

Postmodern Winemaking is not for the beginning wine drinker; but for those interested in getting more down in the weeds on winemaking, it dispels any notion that winemaking, or at least good winemaking, is a simple process. Much of what winemakers think they know is wrong, and it would not hurt if more of them read this book.