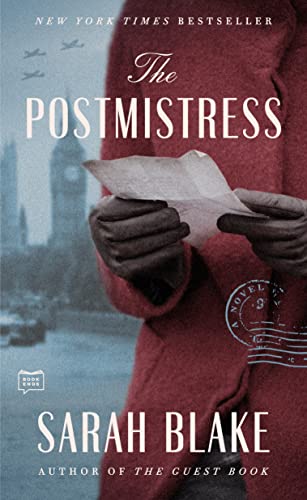 The time is the years 1940 and 1941 and Americans are attempting to stay out of the conflict in Europe. President Franklin Roosevelt has pledged to keep American boys from dying in a new world war, but most Americans are well aware that he’s stalling for time. Hitler’s armies are invading countries throughout Europe and something is happening to hundreds of thousands of Jews. This is the setting for The Postmistress by Sarah Blake.

Blake tells the story of three women—three very different women with different personalities and needs. Iris is the postmistress of the title, a woman who is thorough and organized in everything she does. Iris takes pride in her discipline and in her preparation for all things. Although she’s lacking a suitor, she travels to Boston to see a doctor who will certify her virginity; she’s sure that some man will one day find this to be a factor in her favor.

Emma is a transplant to the east coast, a small and frail woman who lost her parents early in life. She wishes to have a new stable life with her physician-husband. But Emma’s husband feels the call to go to help the victims of the German bombing of London.

Frankie is the tough and ambitious radio reporter stationed in London working with Edward R. Morrow. She’s frustrated and wants to travel to find the “real story” of what is happening to the Jews. She wants to be the voice of truth, a human alarm bell.

Something happens to each of these characters in The Postmistress. Iris eventually wonders if she has placed duty to her job above simple human kindness. Letters and telegrams bearing bad news travel through her hands. Will the point come when she should show some mercy by withholding horrible news? Would it make a difference? Or would it place her in a position of arrogantly playing God?

Emma feels that she may lose everything, including a child on the way, if her husband places the needs of those in England above hers. It’s not America’s war, right? But then she may be powerless in the face of her husband’s desire to serve his fellow human beings.

Frankie becomes tired and devastated over what she observes in war-torn Europe. Hitler’s armies are on the march and the people in the U.S. who listen to her radio show seem to refuse to accept the truth —the truth that war is inevitable. Who else but American boys and men will save the world?

“Whatever is coming does not just come. . . . It is helped by people willfully looking away. People who develop the habit of swallowing lies rather than the truth.”

This novel tells us that stories get told when they need to be told—not before and not after. There’s not a good or bad time, simply the time. Blake does a marvelous job of transporting the reader back to the early 1940s in polite, calm and reasoned language. Perhaps the best compliment that can be paid to The Postmistress is to say that when you read it, you will place yourself in that time and place. You will ask yourself what you would have done then and under those circumstances.

Would you have sought delay as an isolationist (“It’s not our war.”)? Or would you have been one of those who said, “We’re going to have to go at some point, so why not now?” A simple question, perhaps, but the fate of the world—of freedom—literally depended on the answer.

This is an important story about normal people occupying a bigger-than-life stage. Blake tells it impressively and beautifully. The Postmistress is a story that you will be thinking about weeks and months later.

Sarah Blake displays an intelligence in the telling of the story that is, sadly, all too rare these days.