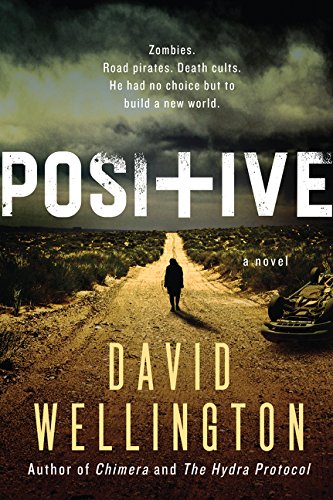 “a satisfying read for the diehard fans out there that are well versed in the worlds of zombies and the end of the world as we know it.”

“I was surrounded by them on all sides. I’d never imagined there were so many of them, that there could be so many—on the radio, the government always claimed that they were dying off, that every year the zombie population was dropping at a precipitous rate. Winter killed far more of them than the government patrols, but it was estimated that within fifty more years they would all be extinct. I think maybe the radio lied.”

Finnegan, known as Finn, has grown up part of the second generation of survivors on the island of Manhattan. He knows a life of little electrical power, grown and scavenged foods, and constant reassurances from the federal government that things will get better. Finn actually believes that the life around him, and the world he has been told exists, is the truth.

Until it is exposed that he could be a positive—someone exposed to the virus that causes a human to turn into a flesh-eating zombie. Branded a pariah by his community, Finn is exiled to a military base in Ohio for others like him, others that are positive and could turn from human and into a zombie anywhere from 20 minutes after exposure to 20 years later.

That change in the zombie mythos—that the virus can incubate for 20 years—is the most original part of Wellington’s novel. As for the rest, it is a tale told plenty of times; it is the hero’s tale of being forced into a journey of self-discovery and ultimate redemption. There have been dozens upon dozens of post-apocalyptic novels that have followed the exact same structure.

But due to Wellington’s skill as one of the masters of the genre, Finnegan’s tale is not just a rehashing of earlier novels. It is a true treatise on the hero’s journey, pulling deeply from the many levels and layers of the archetype, and elevating it above just another tired trope.

Not to say it doesn’t have its clichés: rapists, anarchists, road pirates dressed in wild garb and riding motorcycles. Yet Wellington manages to keep the narrative flowing and rises above the clichés. He gets the reader to care about Finn and keep turning each page to find out what is in store for the naive hero.

Fighting off enslavement, surviving the horrors of a post-apocalyptic government internment camp, setting out on his own without any knowledge of how to navigate a world that is ruled by brutality and self-preservation, Finn faces each struggle and obstacle with a constant optimism that if he just hangs on, just keeps going, he will get to a place, someplace, that will allow him to finally be free.

Unfortunately for Finn there is a lot of death, betrayal, and heartbreak to go along with his basic struggle for survival. He has to learn, live, and love before he can truly end up where he believes he is destined to be.

Wellington’s Positive does not break any new ground, but the ground it does break is well worth walking with him if the reader is a fan of the post-apocalyptic genre or just a fan of a good novel about a soul that refuses to give in, to give up, and let the world bring it down.

It is a longer novel than Wellington’s other works, but feels shorter due to the page-turning action and vivid characters the author creates. Positive is an excellent novel for those just starting to explore the post-apocalyptic genre while also a satisfying read for the diehard fans out there that are well versed in the worlds of zombies and the end of the world as we know it.