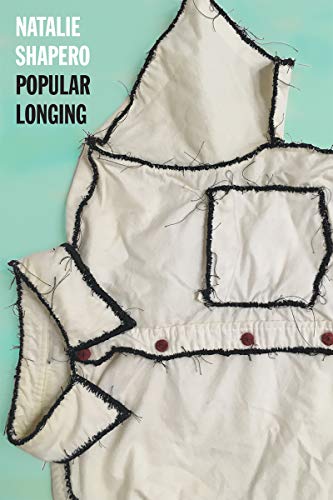 The modern, post COVID feel of the word longing is different, isn’t it? A longing is now more than a want. Maybe even more than a need. Poet Natalie Shapero gets that.

Her Popular Longing poems are certainly as irreverent, as full of impish black humor,  as any she has published before. But here, they are tinged with . . . something.

Take these lines from “Some Toxin” as an example:

“This is what we get. This is the penance

now some people live a hundred and twenty years,

but those years are increasingly spent being bombarded

with adorable profiles of the oldest people,

interviews about what keeps them ticking.

The secret is always some toxin, like bacon or vodka,

And the joke that ensues is always the same:

THE CHEMICALS PRESERVE HIM. That’s all fine

but just once I would like to uncrumple the Metro Section

and find that the key to long life is rage and trauma,

that bitterness girds the organs in equal measure.”

One gets the sense, incorrectly, that Shapero is tired of the joke, that her usual delight at the clever turn of phrase that fits the humor, and the line, just right, has succumbed like the rest of us, remaining mostly black, if not less beautiful for it. It would be okay, were it so. That is the job of poets, we suppose, to absorb the unspeakable and return it to us later, once they have found the words for it.

There are these lines in “Fake Sick”:

“The past is the same as anything else—we built it

And now we can’t kill it. We keep lurching

at it with the scoring ax and connecting

with the walls instead. That punishing season—

the hall’s light hiss, the door off its hinge—

I’m ready to stop remembering. The trouble is

there’s nobody else who can do it. A memory”

All this is not to say Popular Longing isn’t funny. It is. Very much so. It’s just a wryer wit, a wiser sense of humor, all of it still very precise, the math and the music present in every poem of this collection arriving at the tail end of so much absurd uncertainty.

Take this from “Have at It,” a poem that begins like an office joke, the kind that ends with you, and a somewhat present sense of discomfort. You, after reading it, the person who wishes this joke and you had nothing to do with each other, that you weren’t the person so in on this joke from your life.

“When you work here for ten years, you get

a blanket. The blanket has their name on it,

not yours. I am conducting an anecdotal

survey of longtime employees, and I have yet

to find one person who uses the thing

between her children and the dirt

before they all sat down to a meal outside.

S recounted how she’d wrestled it out

of a half-stuck bureau drawer to wrap

her beagle’s body after he died.”

There it is. The music. The tight, gorgeous verse despite the image, or even more so with the help of it. It’s par for the enjoyable course, all 39 poems in the collection, from the initial “Man at His bath,” which includes the line,

“in 1884: some twenty-first-century bitch in Boston

Catching a glimpse of a framed reproduction:

To the final lines of the final poem, titled Pennsylvania:

“I’ve since ceased my believing in death—

there’s no such thing.

There’s only a kind of brownout

The whole of the globe turning

off for a moment, then shuddering

back, the same as it was,

except one person short.

And then before long, an utter new

person is born. Somebody worse.”

And yes, it can be dry. Make you think a little too much. But there’s the rub. You don’t have to, can afford to read these poems, smile and say “how true” or even laugh. Let Poet Shapero record her beautiful, thoughtful lines for later, when you are less sad, can read them, quietly say, “wow.”