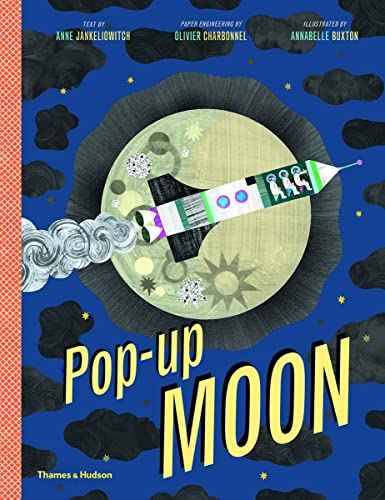 Pop-Up Moon is gorgeously illustrated by Annabelle Buxton with stunning paper-engineering by Olivier Charbonnel. Young readers will spend countless hours poring over these pages, playing with the phases of the moon and the orbits of the planets. The accompanying text by Anne Jankeliowitch provides enough information to create interest while explaining the basic scientific facts about the moon.

A good example of this is how the phases of the moon are described as “growing and shrinking.” This page is representative of the tone of the book and the level of science that is conveyed:

Several questions are posed in these pages, such as “Where did the moon come from?” And is the power of the moon real or make-believe? But the one that many readers will wonder about is sadly missing: Why does it look like the moon is following me when I travel in a car, boat, or train? Is it really shadowing me or is something else happening?

Nonetheless, this book provides plenty for the reader to think about, spending several pages on the Apollo missions to the moon and the discoveries made during them. In fact, the book ends abruptly with the Apollo 11 splashdown, the one off-note in this book. The story, after all, is about the moon, not space exploration, and the focus should end where it started, with the mysteries the moon presents.