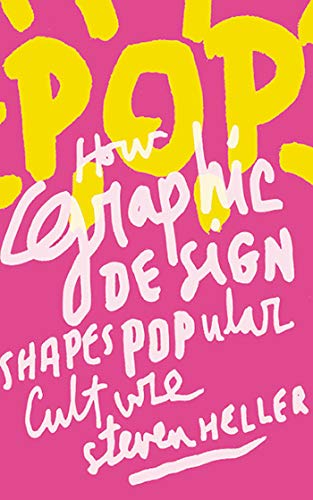 Steve Heller is an astute cultural observer and historian. He sees and hears the icons of culture and uses a flowing narrative style to pin them down for the rest of us to examine.

Of course, there is a strong temptation to think of his book by an alternative title: How Popular Culture Shapes Graphic Design, since the author’s examples and analyses could be used to prove that thesis as well.

Heller starts the book with an auditory icon to show the reader how simple marketing has powerful results when it comes to capturing the consumer’s attention. The “Snap, Crackle, Pop” sound image that identifies a popular breakfast cereal is so burned into the public consciousness that it’s usually not necessary to mention the Rice Krispies™ name. Heller’s point is that the sound logo is an example of a cultural signpost rather than just another clever marketing ploy. “Snap, Crackle, Pop” is not only branded on our cultural horizon, it—with the many other examples the author studies—helps to form the parameters of that horizon.

This is, of course, a good place to stop and ask the familiar chicken-and-egg question. Did, as Heller contends in his title, graphic design shape the landscape of popular culture, or did that culture exert a shaping influence on graphic design? The truer answer is probably “both.” Heller leans toward that conclusion throughout the book. Early on (in the Rice Krispies chapter) he states, “Pop culture is often maligned as fleeting. But history shows that sometimes what is pop in one culture has time-honored resonance in later ones . . . this book is an attempt to show that pop culture, especially as seen through the lens of design, illustration, satiric and political art . . . is integral to a broader understanding of who we are and where we are going.”

Heller shines the spotlight of his analysis on two-dimensional graphic design. He looks at the way an advertising page is laid out, at the impact of the typographic styles utilized, and also at how the content—the actual text—interacts with the other elements. Distorted language is as important as distorted visual design in his research. Heller’s explorations do not stop with the words. He also looks into the impact of commercial and industrial design. The link, for example, between the artistic and architectural concepts of the time and the evolution of the designs of a mass-market line of Kodak cameras, is almost inevitable in Heller’s view. His example is not meant to single out the Kodak design, but rather to point out the symbiosis that occurs between commercial designers and the constantly changing wave of popular culture that they both ride and help create.

In health-conscious Japan, Heller gathers sanitary face masks made by various manufacturers. In this case, his view can no longer be influenced by the text emblazoned on the packages. He compares the look and feel of the packaging. The soft and comforting colors and the inviting softness of the wrappers are all strong design elements on all brands of that product.

A good portion of Heller’s book probes content as an important ingredient in the cultural mix. The words are tied to the visual art in his view. His insights include a personal narrative of his experience with, and an analysis of, the 1960s play Mac Bird, a work based on Shakespeare’s Macbeth that juxtaposes Presidents Johnson and Kennedy with Shakespeare’s Macbeth and Duncan. He matches the excitingly strange drawings of artist R. Crumb with Crumb’s stinging cultural critiques.

No part of the cultural mix seems to escape Heller’s scrutiny. Pop is a valuable tour guide for those who weren’t there to watch the phenomena he describes. For those who were there, it is a lucky opportunity to relive history with a patient conductor pointing out all the things you might have missed the first time around.