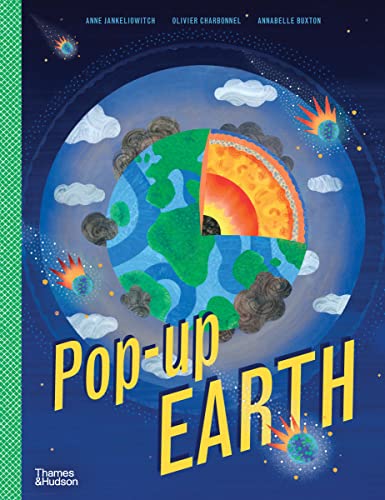 This is a beautiful book with ingeniously engineered pop-up pages. The art is so gorgeous, it would take an exceptional text to live up to it. It is difficult in any case to compress all of earth science into a simple format, and some sections work better than others. Describing the “Crust, mantle and core,” for example, Jankeliowitch writes: “The Earth is made up of layers of hot rock. The outer lawyer is a thin solid crust. Beneath the crust is a mostly solid layer called the mantle.”

So is the outer layer hot? Are we walking on heated ground? Obviously we aren’t, unless it’s a sunny day that’s baked the soil or we’re at a beach in summer. The description goes on to the core, saying it “is made from iron and nickel, two very heavy metals. It’s the core that creates the Earth’s magnetic field.” What is a magnetic field and why does it matter to the Earth or those of us on it? Why mention it at all when there’s no further discussion of it? Will the average young reader know what a magnetic field is? Will their parents?

The section on water is more successful. “When the Earth was first formed, water was created in the form of hot clouds of gas. . . . Over time, the Earth’s atmosphere grew colder and the clouds condensed. It started to rain and kept raining for millions of years! That is how the oceans were formed.” To realize that the vast depths of the oceans started as rainwater will spark wonder in most readers. And it is a great way to express the age of our planet, how long it took to develop the form it has now.

Another tricky element in a nonfiction book like this is the temptation to editorialize, to deliver messages rather than simply information. The problem is that the messages often feel heavy handed when letting the facts speak for themselves is more effective. In the section labeled “The Human Rainbow,” it’s enough to state that “Humans come in a huge range of shapes and sizes with different faces and shades of skin, as well as many different cultures, languages, beliefs, and ways of living.” It’s jarring to tag on, “But these differences don’t mean that some people are better than everyone else.”

A similar jolt happens in the section on Biodiversity. It works well to say, “All living things are connected to each other and to their environments. . . . Removing one single form of life would upset the balance of everything else, like knocking down a house of cards.” It feels unnecessary to add, “We should never forget that humans are a part of this house of cards too!” The abrupt change of tone, from informative to hectoring, is disorienting, turning a nonfiction book into an opinion piece. There is a place for that kind of writing, of course, but in this case it undercuts the science the book presents.

Still, this is a book to be savored, begging for time to be spent looking at the rich details on every page. Clever teachers will invite their students to write their own texts to go with the art, spurring a different kind of discovery.