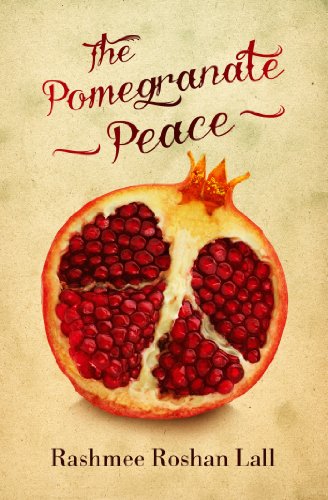 “The story told here about Afghanistan is nearly exactly the story that was told in Iraq. Two wars that if they had any validity in the first place . . .”

Pomegranate Peace, a new novel by Rashmee Roshan Lall, is an all-too-true piece of fiction about the failure of U.S. reconstruction efforts in Afghanistan and the crippling isolation America's diplomats imposed on themselves in that misguided war. The novel is also a cookbook, but we'll get to that later.

The story is built around the arrival to Afghanistan of a fresh State Department employee, quickly tasked with one of the many reconstruction projects designed by the U.S. to gain the hearts and minds of the Afghan people: eradicate poppy production to save the drug-using American people and, not coincidentally, win the war.

The project could have been any of the insane ideas tried in Afghanistan (as they were in Iraq) but in this case it was pomegranates. First step was $5 million in U.S. taxpayer money handed over to an Afghani-Canadian contractor resident in Vancouver. Said Canadian would then use the money to get Afghan farmers to grow pomegranates to replace the evil poppy and then arrange for the fruit to be marketed worldwide. Afghanistan apparently grows some mighty tasty pomegranates.

Though it would be wrong to spoil the tragicomic details of how the project rapidly falls apart (alert readers may already be questioning how someone in Canada could affect much change on the ground in Afghanistan), it does, with the only pomegranates ever exported traveling out on a single U.S. military flight, and the protagonist fails spectacularly and semi-hilariously in her whistleblowing attempts to tell the State Department how pitifully it has again failed.

It's a good story, and you keep turning the pages to watch it unfold.

"We soldiered on proposing—and paying for—a philanthropic revolution at every level of Afghanistan's life as a nation but our only measure of success was that the 'small' grants were big and the big were simply enormous," says the main character. Indeed, since 2001 nearly $60 billion has poured into Afghanistan. Yet the author's description of her city—"twenty-first-century Kabul's story appeared to be written in the dust that overlaid a definite, if ill-defined sense of decay—" tells the tale of waste. "Be nice to America or we'll bring democracy to your country," one character sardonically jokes.

Paralleling the main story line is a more subtle one as the main character comes to grips with the near-complete isolation that America's warriors in suits live in. Referring to the walled compound in Kabul as "Americastan," her quest to connect with the country she is tasked with saving fails several times, until the very few Afghans allowed inside the ramparts begin bringing her local food. The food enters her life as a respite from the cafeteria glop served to the cold warriors, but quickly becomes a window into the real world outside.

Alongside the narrative, the book is filled with actual recipes, which grow in complexity as the story progresses. The inclusion of recipes is distracting at first, but they are presented in italics and thus easily skipped over if you prefer. Using food in this way is a nice tool to illustrate the problem of isolation.

I wrote a book about the failure of reconstruction in Iraq and can clearly see in Pomegranate Peace that art imitates life. In Iraq we wanted to save the nation by exporting chicken, and failed, while our contractors bought condos in Dubai. We even had a failed agricultural coop venture not unlike this book's own.

And the same cast is present here: bureaucrats with no knowledge tossing around millions of dollars, smart careerists pressing forward in fear of rocking the boat, a few locals making bank off us even while so many others around them slipped further behind, unable to drain the American money teat for themselves.

The story told here about Afghanistan is nearly exactly the story that was told in Iraq. Two wars that if they had any validity in the first place went on too long, took too many lives, and consumed too much money. Handmaidens to the failures in both cases were bureaucrats who gleefully acted on their ignorance to—almost against the odds—make a terrible situation worse.

Peter Van Buren's first book, We Meant Well: How I Helped Lose the Battle for the Hearts and Minds of the Iraqi People, led to the end of his 24-year career as a State Department Foreign Service Officer—though with full benefits. His commentary has appeared in such varied publications as the New York Times, al Jazeera, The Nation, American Conservative magazine, Mother Jones, and others.