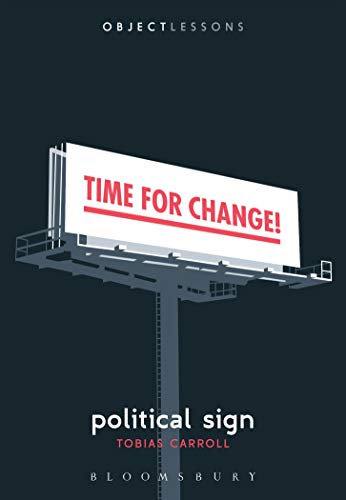 “That we have new levels of symbolic saturation via social media should give us a long moment of pause as we consider the intended and unintended effects of the powerful technologies that mediate our worlds.”

Some of the most interesting spaces exist at the interstices, releasing unexpected and surprising dynamics. In Political Sign, that liminal space is between politics and aesthetics. The book’s title is, of course, at once a signifier and a signified.

In the 2020 electoral season, they were everywhere. But the day after the election, they start to disappear like ephemeral ghosts. Carroll notes that these signs become a collective statement of the political tonality of a place. In one small, rural, central Alabama town, there is an abundance of signs supporting Biden/Harris. (It’s a college town!) As an indicator of the power of these signs, there have been numerous credible reports of their being stolen from front lawns under the cover of darkness.

Though the book doesn’t venture into the history of the vote, political yard signs harken back to the earliest post-revolutionary voting that was done by public voice. There was no secrecy of the vote. And so these signs make it quite clear, in that small, who is on which side of the political divide.

This isn’t to say that Tobias Carroll does not step back into history. Indeed, he walks us through the marketing of politics of which signs are but one subset. The modern art of political advertising can be traced back to Dwight Eisenhower (1953–1961) and brought to a new level by Richard Nixon (1969–1974). It was the beginning of presidential branding as the commodity advertising ethos began to take a deep dive into politics. Presidential hopefuls now have lots of merch that weds signification with capitalist consumption.

It is useful to extend Carroll’s observation by noting that major ad firms (e.g., the Ogilivys and Gray Internationals of the world) won’t touch political advertising in the U.S. even though obscene heaps of money get dropped on presidential campaigns. In the 2020 cycle, it’s estimated that $6.7 billion will be spent. Big firms, however, cannot be seen as partisan for obvious reasons. Thus, the art of the political ad is left to specialized, partisan operations whose wizardry runs from the benign to the darkly malicious.

More formal political signage, with its template quality, sits in contrast with protest signage with its even more ephemeral and DIY quality. Political signs also find their way distinctly into sports. Here, think of the quotidian presence of the Confederate battle flag at NASCAR races. Indeed, the two were so clearly wedded at the hip that, as the Black Lives Matter movement gained momentum, NASCAR had to ban that symbol of slavery, racism, and white supremacy.

The book, then, takes an unexpected turn into politics and punk rock that emerges into a chapter on the body politic and tattoos, some of which take on a very punk sensibility.

What follows is a meditation on the increasingly partisan nature of political signage: Obama’s HOPE to Trump’s MAGA. Both so clearly reflect an identity that is politicized. Tobias, here, deftly moves into a nuanced discussion of political aesthetics with art as sign and sign as art.

Whatever their format and scale—yard signs, billboards, tattoos, life-sized candidate cutouts—Carroll notes that the important underlying connection is communication. In Mexico, for example, there was a baroque and labyrinthian quality of politics. Campaigns traded heavily on signs. Unlike the American obsession with yard signs, in Mexico the focus was on hanging plastic or silk-screened cloth signs (after all, Mexican urban planning is just so different, no yards, so signage adapts). Equally striking were edifices splashed with one party or another’s signage. This was punctuated by mass rallies with their scripted drama, bused in crowds of the loyal, and endless tag lines.

It was full-on symbolic politics. It seemed so different from American-style televised campaigning with carefully crafted imagery, sound bites, and staging.

Fast forward to America 2020. It’s now clear that techno-media didn’t kill symbolic politics but rather super charged it. We have experienced unimaginable and norm-breaking levels of governance and campaigning through Twitter after all. At the book’s end, Carroll argues that his analysis cannot be subsumed under the “internet changed everything” banner. Yet it is that very internet that made the production, reproduction, and circulation of signs easier, quicker, and more pervasive. In other words, it pressurized symbolic politics into its Instant pot version. And that may be revolutionary.

The late-cultural critic Neil Postman once noted, “The environment created by language and the printed word has now been moved to the periphery of the culture, especially the printed word. And at its center, the image is taking over.”

Postman, and many others, gave imagery an overstated place in the delivery of messages hawking commodities to politics. They were seduced by image driven ads and extended the argument to political campaigning.

They were not wrong about the power of visual imagery, but they could not have predicted what the internet and social media would do for both images and words. As Carroll rightly concludes, now more than ever we need sound media literacy as a prophylactic to the seductions of eloquence. However, what remains unexplored are new forms and levels of techno-manipulation (the role of bots, deep fakes, international actors, and the deterritorialization of political signs and propaganda spin around them).

As Marc Gellman once discerned, “Eloquence seduces us to forget what we already know to be true. Another seduction of eloquence is that it moves us to buy what we do not need.”

The seductions of political symbolism should never be underestimated in their ability to move people to action, sometimes quite contrary to their own interests. That we have new levels of symbolic saturation via social media should give us a long moment of pause as we consider the intended and unintended effects of the powerful technologies that mediate our worlds.