The Polar Bear Expedition: The Heroes of America’s Forgotten Invasion of Russia, 1918-1919 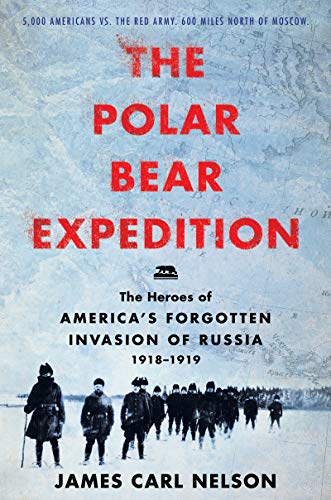 “Nelson tells this story and so much more with great pathos. His intimate portraits of some of the 339th’s doomed men are heartbreaking, and The Polar Bear Expedition is more than a great celebration of this little-known conflict.”

The lie that American and Russian soldiers have never squared off against one another in open battle has been repeated by at least two presidents (Nixon and Reagan). As author James Carl Nelson notes repeatedly in The Polar Bear Expedition, not only have US and Russian forces shed each other’s blood, but during the brutal fall and winter of 1918–1919, a small American expeditionary force managed to kill thousands of Bolshevik grunts in Northern Russia.

The Polar Expedition chronicles the tragic story of the two hundred-plus men of the 339th Infantry Regiment. Formed in 1917 and made up of Wisconsin and Michigan boys (the large number of Detroit natives helped the 339th to be nicknamed “Detroit’s Own”), the 339th would never see the battlefields of France, despite the fact that 100% of the men had joined the unit in order to fight the Germans.

Instead, in the late summer of 1918, the 339th was sent to Archangel, Russia, in order to open a new Eastern Front after the collapse of the Tsarist army in 1917. Eventually forming part of the British-led North Russia Expeditionary Force, the 339th, along with their British, French, Polish, and White Russian allies, would spent months holding off and defeating much larger Bolshevik units in no-name towns up and down the Dvina River. Some of these towns, like Bolshie Ozerki, Pinega, and Kodish would see horrors comparable to the Meuse-Argonne or the Somme.

Nelson’s well-written and well-researched history brings this often overlooked war to life. Few today remember that over 100 American soldiers died in the frozen wastes of Northern Russia, and even back in 1919 millions of Americans cared little about the men of the 339th.

The doughboys themselves questioned why they had been sent to meddle in Russia’s internal affairs. President Woodrow Wilson and other members of the American government could only give them weak answers—to open a second front against Germany (a fact no longer necessary after November 11, 1918), to rescue the lost Czechoslovak Legion of the Tsarist army, and to guard American munitions that had been sent to both the Tsar and the brief democracy that was overthrown by the Bolsheviks in October 1917.

Nelson’s account is consumed with a sense of bitter melancholy and morbid humor. The brave but few Americans fought extremely well against the Red Army, and despite great odds (at one point, the Bolsheviks numbered 600,000, whereas the Allied forces in Northern Russia barely topped 1,000 men) the American, British, French, Polish, and White Russian troopers usually held the line or captured villages from the Bolsheviks. However, the numerical superiority of the Communists, plus the cold, starvation, and exhaustion of the Allied forces made withdrawal the only viable option.

While the men of the 339th returned to Detroit as heroes, their stories were quickly forgotten. Nelson notes that the men, who later christened themselves as “Polar Bears,” never gave up on their dead. In the mid-1920s, several returned to Northern Russia in order to exhume their dead and return their remains back to the United States.

Nelson tells this story and so much more with great pathos. His intimate portraits of some of the 339th’s doomed men are heartbreaking, and The Polar Bear Expedition is more than a great celebration of this little-known conflict.