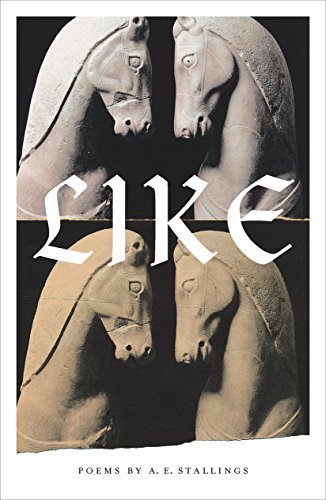 A. E. Stallings’ reputation as a poet is already established. She has the distinction of being a McArthur Fellow (2011), that peculiar laurel that bestows “genius” on the recipient. Her dedication to Classical Greek poetry makes the laurel more literal than it might be for some: one can easily imagine her wearing a wreath as she contemplates the ancient world in all its subtleties. And her daily life in Athens only reinforces that connection. Stallings is an American poet with a foot in the Classical world, gazing at two eras at once.

Her new collection, Like, makes its Classical connections known immediately. Its cover features four ancient horse-heads in mutual contemplation. Its initial poem, “After a Greek Proverb,” offers that proverb, in Greek, below the title. But “After a Greek Proverb” gestures, too, to the European tradition of formal verse. It is an elegantly-crafted villanelle: 19 lines, two rhymes, ending in a quatrain. For modern readers, the form is most recognizable in Dylan Thomas’ “Do Not Go Gentle Into that Good Night.” But Stallings deftly avoids Thomas’ gravitas. Her refrain, recurring and proverbial, is lighter: “Nothing is more permanent than the temporary.”

That initial poem showcases Stallings’ grasp of formal poetry. Few modern poets work so consistently with rhymed, metered poetry as she does. When she makes those forms work, the result is magnificent. Her “Psalm Beginning with Two Lines of Smart’s Jubilate Agno” takes up a heartfelt contemplation of cats and expands it beyond Christopher Smart’s asylum cell to ancient Egypt. Smart’s poem of divine contemplation features an extended consideration of the divinity of his own cat, and may surpass even T. S. Eliot’s Old Possum’s Book of Practical Cats in the hearts of feline enthusiasts. Stallings’ poem might easily follow that one in a well-considered anthology, offered up for generations of students.

When Stallings’ poems succeed, they cry out for anthologization. They will escape this temporary collection and go forth into textbooks to represent the best work of an Important American Poet. In that future life, they will capture attention and lend themselves to memorization and sharing.

When her poems stumble, they feel more appropriate to The Stuffed Owl than the textbook. (That collection affectionately features painful attempts at formal verse by some of the best writers in English literature, but there is no question that it is the original book of Bad Verse.) “Like, the Sestina” manages to end every line with “like,” rather defeating the sestina’s technical purpose. It struggles to find meaning beyond the popularity of “like” in valley-speak and social media. A meditation on cookware’s relationship to civilizations cringes before its title: “Cast Irony.”

Other pieces show enormous technical range but struggle to move from domestic idyll to complex idiom. “Lost and Found” moves through 36 numbered stanzas of ottava rima and takes the persona from housewife frustration to a dream-dialogue with the goddess of memory. Is this a mock epic or a failed one? The inventory of lost objects (time, teeth, beauty) teeters between delicate attention to small details and mawkish sentimentality; in its course, the poem steps into both realms.

Most striking is the collection’s lack of internal logic. Like’s poems are not collected by theme, but rather arranged alphabetically by title. The resulting juxtaposition does the poems few favors. A reflection on children’s deaths as migrants flood to Greece lurks between a Classical address to ancient gods and the playful exploration “Epic Simile.”

Stallings has been criticized before for emphasizing formal elegance over idiom and theme. In that sense, Like is a sometimes-frustrating extension of her body of work. Frustration creates archeology: there are treasures here, but they demand patience and separated attention; they reward dedication, and they shine when lifted from the surrounding chaos.