Plunder: A Memoir of Family Property and Nazi Treasure 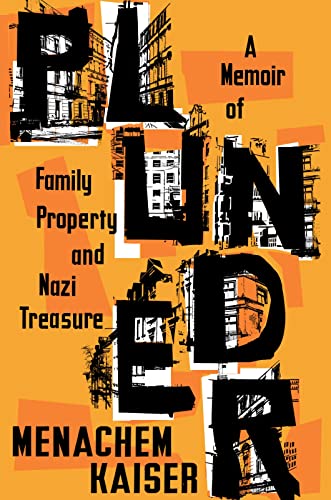 “a brilliant book, one that lays out several gripping mysteries and reveals how the personal is very much political, all wrapped in a compelling narrative that will keep readers turning the pages . . .”

Menachem Kaiser has crafted a book that’s several intriguing, intertwined stories. What holds it all together is the author’s voice—intelligent, sensitive, wry, and deeply honest. This isn’t a grand adventure and there are no tidy endings. It’s messy, complicated, conflicted—and deeply resonant.

The journey begins as an attempt to recover Kaiser’s grandfather’s Polish property, lost during the Holocaust. Since the grandfather, a Holocaust survivor, died before his grandson could meet him, the search is as much for who this grandfather was, what his life was like, as for the apartment building he owned.  Kaiser describes himself as a memory tourist, one of the thousands of Jews searching for their family roots in places that exterminated their people. He writes, “The destination is as much mythological as it is geographical. At the center . . . there is a story. How did he survive? . . . What did he go through? The story might be partially known or even entirely unknown; but it is known that there is a story. It is less historical than anecdotal: it is personal, it is living.”

But this isn’t a story like the thousands of others. Because Kaiser is persistent and patient. He travels to Silesia, where his grandfather lived and throws himself into the strange culture of the region. “At the center of this Silesian culture of mystery is something called Project Riese, a series of seven underground complexes dug by the Nazis, or, rather, by Jewish slave laborers. . . . Exactly why the Germans built Riese, at enormous expenditure and up until the last days of the war, has never been conclusively determined.”

Although his grandfather had nothing to do with these tunnel networks, Kaiser takes the reader on a long, fascinating detour into the world of not just Nazi engineering and slavery, but the contemporary Poles who avidly explore Riese, creating a cult of “treasure hunters.” These men and women are looking for Nazi souvenirs, for the treasures the Reich stole and hid away, supposedly in a secretly hidden “gold” train. That thousands of people died building the tunnels is acknowleged but not dwelt upon.

Kaiser understands the magnetic draw of the tunnels, the hold the mystery has on these explorers, but he can’t shut out the ghosts. He wonders about the treasure hunters: “How do you take into account all the people who died digging those tunnels? Is that part of the story you tell yourselves? . . . Does it matter to you? . . . Sure, Riese might be a grand exciting mystery, but it’s also, if not quite a mass grave, then a stark physical testament to mass murder.”

The conflict of mystery and history sharpens when Kaiser learns that the only book about Riese, a kind of bible to the treasure hunters, was written by one of the Jewish prisoners who worked in the tunnels. The author is named Abraham Kayzer—the same last name as Kaiser. Although a Jewish Holocaust survivor, Kayzer holds a mythical stature to these Poles, a rarity in a culture that denies Polish complicity in the mass murder of Jews. He’s “‘a great, great man,’ they said.”

This starts Kaiser second quest, to learn more about who this Abraham Kayzer was and if he was related to his own grandfather. There are as many twists and turns in the Abraham Kayzer story as there are in the apartment building story. Both are quests to better understand the author’s personal family history and the broader history of what it means to be a Jew after the Holocaust, how to ask for justice and recognition when one person’s justice is another person’s theft. Is reclaiming stolen property restitution or another form of theft to the current inhabitants? How do you right historical wrongs without inflicting new wrongs?

“Reclamation is an issue with monumental demographic, political, and social stakes; it has been a central issue in more than one [Polish] national election. Sometimes the conversation can take on a regrettable tone: occasionally the greedy foreign Jew will show up in cartoons or political sloganeering, hungry to take advantage of his historical ‘windfall.’ But there are legitimate questions of costs, responsibility . . . and of logistics.”

These are complicated issues and Kaiser does an exceptional job of laying out not just the different perspectives, but his own conflicted feelings. Through it all, the background of Nazi evil and Polish anti-Semitism loom large. But there are no caricatures here, no easy simplifications. Instead Kaiser offers us a richly multilayered series of mysteries, all colored by the horror of the Holocaust and what it means to be a Jewish in the wake of such history.

This is a brilliant book, one that lays out several gripping mysteries and reveals how the personal is very much political, all wrapped in a compelling narrative that will keep readers turning the pages, hoping for a resolution that glimmers in the distance like a mirage.