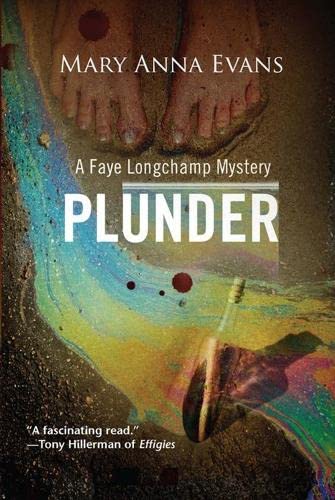 “Strong heroines are always a pleasure to read about . . .”

From page one time is running out for archaeologist Faye Longchamp and her husband Joe Mantooth. Their consulting firm’s new project requires them to map archeology sites in the Mississippi River off the shores of New Orleans before the oil spill from BP rolls ashore. Sometimes they can smell the oils slick as it relentlessly rolls toward them. It seems the pirates that patrolled these waters were replaced by the oil companies.

Tension is a necessary aspect of a mystery, but tough to write without relying on the old chestnut of a dead body. The oil spill provides an added frisson of suspense here, and it’s refreshing to see how that change in structure keeps the reader turning the pages.

Faye, Joe, and their toddler son Michael are renting a cabin, and Amande, a precocious teen, and her voodoo practicing grandmother live on a houseboat nearby. Faye’s attitude on voodoo seems sensible—she doesn’t want to say she believes, but she’s not ready to say she doesn’t believe either.

Amande has found some old silver coins and wants Faye to confirm they are the keys out of a life of poverty. When her uncle and grandmother are murdered, it seems the coins may be a source of misery, not hope.

Louisiana inheritance laws differ from those of the rest of the United States in that they derive from French law, not English law. The byzantine system forces Amande to let her alcoholic aunt and greedy uncle live on the houseboat as she waits for the small inheritance to be sorted through. The aunt and uncle are both thoroughly reprehensible people, and it’s clear that if they thought getting rid of the teen would help speed the meager inheritance of the boat, some stocks, and an uninhabitable island to them, then Amande is in deep trouble.

Social workers, lawyers and Faye and Joe all agree this is a bad situation. It’s nice to see the legal system portrayed in a sympathetic light, not as a rapacious organism. These people don’t want the teen to be hurt, and they understand if she left the boat even for a short time to live with a foster family, she might never see home again. On the other hand, staying is not safe either.

Strong heroines are always a pleasure to read about and both Faye and Amande fit that bill. It took Faye a long time to earn her doctorate; she was married later in life, and is a mother in her early 40s. This all reinforces Amande’s hope that there may be a way toward a better life—and Faye wants badly to let her try and build that life.