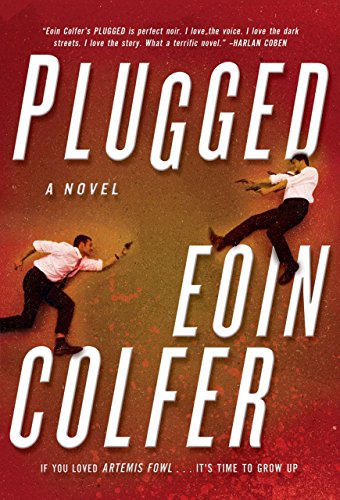 Daniel McEvoy has a problem. Well, really, he has several, but for this Irish ex-pat living in New jersey and working as bouncer at a seedy, small-time casino the fact that his girlfriend was just murdered in the parking lot is uppermost in his mind. That is until lots of people around him start dying, and not of natural causes.

Suddenly Daniel’s got half the New Jersey dirty mob, dirtier cops, and his man-crazy upstairs neighbor after him—and he still doesn’t know what the hell’s going on. Bullets are flying, everybody’s on the take and it all may be more than Daniel’s new hair plugs can handle. And Daniel’s got to find the guy who put in those hair plugs—or at least his body—and fast, or else he’ll never get that voice out of his head.

Plugged is narrated by Daniel McEvoy, an ex-Irish Army sergeant scarred with the trauma of peacekeeping duties in war-torn Lebanon. Dan joined the army because he figured that it was “better dying overseas than living at home.” He hears voices in his head, and not always good voices.

Dan also has a complex about his receding hairline, which doesn’t help when having multi-conversations with voices known and unknown. Finally, despite all his world tracking, he decides to take one more journey, this time across the Atlantic to America, where he becomes a bouncer in Slotz, a small-time and very seedy nightclub where even the roaches need to wear bulletproof vests.

Soon after his initiation into the club’s virtues and values, Dan’s best friend, Zeb, a dubious plastic surgeon responsible for the hair plugs in Dan’s balding head, disappears, and his favorite hostess and love interest, Connie, a single mother of two, is murdered behind the club, leaving a vengeful Dan no alternative but to find out who kidnapped Zeb and, more importantly, who was involved in the murder of Connie, making him an enemy of ruthless drug-dealer Mike Madden.

Plugged is a miles-apart transition for the acclaimed young adults’ author, as he makes the brave leap to adult fiction—not the easiest of leaps to make, especially if that leap is the wide and dangerous canyon of hardboiled crime where safety nets are as scarce as a Tony Soprano’s diet.

Thankfully, Mr. Colfer’s leap of faith has him landing expertly and solidly on his feet with page-turning ease. Funny, acerbic, crazed, riveting, sardonic—with just the right amount of hard-boiled dialogue—Plugged is everything you want in a summer read.