The Plaza: The Secret Life of America's Most Famous Hotel 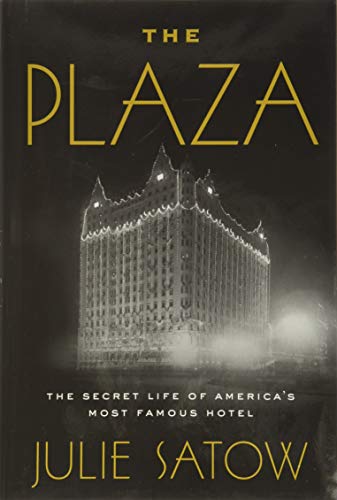 For probably the silliest of reasons I wanted to review this book on one of New York City’s great landmark hotels, The Plaza. For 27 years, from 1918 to about 1945, my grandfather Raffaele De Yeso, a recent Italian immigrant, worked in the Plaza Hotel. For 27 years he went to work at the magnificent Plaza from 3:00 P.M. and worked until midnight. He was a “fireman-engineer,” which meant, I think, that he shoveled coal in some sub-sub-basement of the 18-story hotel. I didn’t really expect that his name would appear along with the Vanderbilts, the Harrimans, Trumps, or the Diamond Jim Brady, who populated this richly dressed book. Having read and been enthralled by Arthur Haley’s book Hotel, I knew the story of a hotel could be exciting and entrancing.

Satow delivers one aspect of her look into one of the great landmarks of New York. Most people think of hotels simplistically. I know I did. But Satow explores the hotel that “straddles the public and private spheres, making them uniquely positioned to explore matters of history, money, and class.” If only she had done that.

Satow has done her research and provides a glimpse into the Gilded Age of a great hotel. As fascinating as is the story of the rich and their coddled poodles so, too, the description of the subterranean kitchen located in a maze of white tile rooms below ground lorded over by Monsieur Lapperraque, a French master chef who had 83 chefs under him. Even the ventilation system is fascinating, an elaborate system to purify oxygen into the building and a network of thermostats that ensured no annoyance from faulty furnaces or steam radiators.

The catalog of the amusing antics of the leisure class as they prance about the Plaza in all its and their glory is a window into another world, a world in part of rich dowagers who actually live in suites at the hotel where their every need is catered to including their conspicuous consumption.

One example Satow introduces is Princess Vilma Lwoff-Parlaghy who had a dozen-room suite in the Plaza with her three French maids, several attachés, a marshal, a courier, a butler, and a chef. She was indisputably rich but whether she was of noble blood was another matter. There were many rich widows living at the Plaza in later years. Ella Peterson Tuttle Freeman was the Plaza’s oldest resident, having checked in in 1932 and not checked out until age 103 in 1960.

For all the stories of the outrageous and ludicrous rich denizens Satow also does not neglect the economics of the hotel business, which saw its ups and downs, including disputes with the unions. However, she only glosses over that aspect.

Then enters Conrad Hilton to change the Plaza through major renovations, bringing it into a new—and profitable-era. At this point one might hope for some insights into the internal workings, management, and business economics of running the grand dame of New York hotels. But, no, more celebrities enter the story—Zsa Zsa Gabor, wife of Hilton.

On the other hand, glamour is important to a great hotel as we learn. Turn the page and our next celebrity and saving grace is Kay Thompson, the choreographer, actress, and most famously, author of the books whose character was Eloise, an inspiration to a generation of children. The several pages too many devoted to Kay Thompson weren’t clear in a book on the Plaza. If the criteria are that someone must have once stayed at the Plaza, then an author can surely populate the book with interesting characters unrelated to the interesting hotel.

Next up? It’s the Beatles! By now, we’re half-way through the book and honestly, enough about celebrities. How about a maid, a waiter, a desk clerk, the house detective (we don’t know if the Plaza had one), or a fireman-engineer?

Hilton only owned the Plaza from 1947 to 1953, so we move on to the new owner A. M. “Sonny” Sonnabend, who was more of a businessman than a hotelier, but perhaps that’s what the Plaza needed. Well never mind the hotel business, let’s get back to celebrities.

Enter author Truman Capote in 1966 riding the wave of his astounding real-life crime book In Cold Blood. His contribution to the wild parties of the Plaza was his bal masque, a costume ball, basically to celebrate himself—he was great at public relations. One writer declared it the last great party.

Satow runs through the catalog of owners and each of their particular travails. It also sometimes seems that any celebrity who set foot in the Plaza gets a mention—Michael Jackson with daily orders of candy; Mickey Rourke, the actor who trashed his room to the tune of $20,000 in damages. And then we get to Donald J. Trump, present president and brash real estate developer of the ’70s, and soon to be owner of the Plaza. The Trump story of those days sounds pretty much like the Trump story of these days—basically sordid. Trump owned the Plaza for four years, paying a record amount, and he lost it to the bankers. Trump drove the Plaza into bankruptcy, the first in its 85 years.

Some 300 pages of The Plaza are devoted to owners, the rich, and the celebrities. If an employee gets interviewed it is only to report on the aforementioned rich. One never gets the sense of what the daily grind of running a grand hotel is like, of what it involves. One never sees behind the curtain as to the “secret” behind the Plaza.

The subtitle of Satow’s book is a misnomer surely; there’s no secrets here, just what you can find by scrolling through lots of newspaper articles. A secret history would have been a conversation with the fireman-engineer working many floors below the lobby or with the maids and what they encountered in the rooms. The little people don’t show up in Satow’s book to any appreciable degree.

And although we are promised at the beginning of the book some Thorsten Veblen-like insights into the meaning of conspicuous consumption it is not delivered. Rather it’s a story—not of a hotel per se—but of rich developers and businessmen playing out capitalism’s natural course with a supporting staff of quirky dowagers, actresses, and other poseurs all coincidentally located in a hotel.