Playing Through the Pain: Ken Caminiti and the Steroids Confession That Changed Baseball Forever 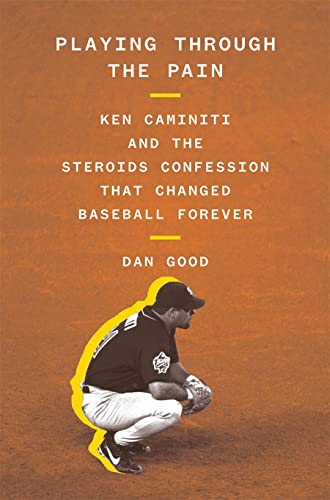 “a fascinating and compelling story of a tragic hero and the fields on which he lived and played.”

The June 3, 2002, cover of Sports Illustrated featured a baseball with two crossed syringes superimposed on the ball. In large letters above the ball were the words “Steroids in Baseball,” and, in slightly smaller type below the ball, it read “Confessions of an MVP.” It was at this point that the baseball career of Ken Caminiti and the steroid rumors in baseball converged. The 1996 National League Most Valuable Player, Ken Caminiti of the San Diego Padres, offered Tom Verducci at SI a clear and matter of fact account of steroid use in the National Pastime.

Dan Good as journalist, author, and ghost writer with a strong baseball resume was long intrigued by Ken Caminiti who played at the major league level for both the Houston Astros and the San Diego Padres. Caminiti was a player with considerable talent who played with an extraordinary intensity and played through injuries that would have sidelined many players. He was also a person who carried around a large trunk of emotional baggage resulting from insecurities, sexual abuse as a child, and what might be seen as an obsessive-compulsive disorder.

Ken Caminiti was seen by those who knew him, even casually, as an extremely nice person, humble, and helpful to everyone he met. He married his high school sweetheart with whom he had three daughters he loved deeply. However, he never knew contentment and always believed he fell short of what he should be both as a player and person.

From his high school days Caminiti used alcohol. That use increased over time to a point of alcoholism. In addition, he found solace and confidence in drugs. In a baseball culture where both alcohol and drugs were available in the clubhouse, Caminiti came do depend on all of what was there, including amphetamines. Outside the clubhouse, he developed an addiction to cocaine and crack cocaine. As a healing drug and performance enhancer he turned to steroids, an enhancer and enabler widely used in baseball.

Ken Caminiti’s life in and around baseball is the primary subject of Playing Through the Pain. It is a life full of promise and considerable achievement by a talented athlete with a deeply flawed character, the sources of which were many. Dan Good’s diligent research and easy flowing writing bring Caminiti to life. This is a sympathetic portrait, perhaps at times too sympathetic, as Good seemingly relieves Caminiti of any responsibility for his decisions.

At the same time, Good conveys the complexity of Caminiti’s personality and the broad range of forces that led him to make bad decisions on multiple occasions. These decisions had many negative consequences for him and those around him. Despite all the bad decisions, Ken Caminiti was loved by his teammates and by baseball fans in San Diego and Houston. His life illustrates the unfortunate tendency in sport that allows talent to override all the negatives.

The secondary subject of Playing Through the Pain is the prevalence of steroids and other substances in baseball and the enabling role of baseball’s leadership who for too long insisted there was no steroid problem in the game. From the Commissioner to management to coaches and players the issue was not confronted and often ignored. The press that covered the sport failed to expose the problem or raise the issue in print, and the fans seemingly didn’t care but were more interested in the home runs generated by PEDs.

Dan Good documents these failures fully, and he condemns the hypocrisy and the dissembling of baseball’s leadership. He examines the effect of steroids and other drugs on the game. Not only did they produce a home run bonanza, but steroids also lengthened the careers of some players. Peak performances by both pitchers and hitters well into their thirties were occurring when, in fact, a decline should have been the norm.

The significance of Ken Caminiti’s revelations about steroids in baseball is that he was a user, made no attempt to hide it, and was willing to go on the record and speak about. In addition he was unapologetic about his steroid use, and said he advised other players who wanted to compete at the highest level to use them. It was his willingness to talk frankly that led to his interview with Tom Verducci and the SI article in June 2002. The consequences of that interview included Congressional hearings, more revelations, and ultimately compulsory drug testing in baseball.

Ken Caminiti’s role led many, including Dan Good, to portray him as a hero for his honesty. His enshrinement in the San Diego Padres Hall of Fame is one result of this attitude toward him.

However, the further descent of Ken Caminiti followed, and that part of this story is no less tragic than other aspects of his life. He died of a drug overdose in a New York crack house on October 10, 2004, at age 41.

Dan Good has produced a very readable story offering in considerable detail a tragic tale and a significant part of baseball history. One may not accept his interpretation of events and his characterization of Ken Caminiti, but this is a fascinating and compelling story of a tragic hero and the fields on which he lived and played.