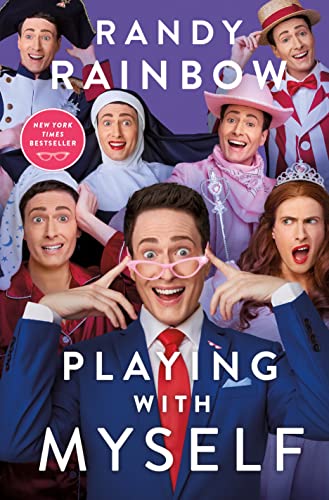 “Rainbow’s balance of self-deprecating humor and serious autobiography makes for a great read. Playing with Myself is aptly titled. Randy Rainbow is everything his fans want him to be: a joyful entertainer who loves performing for his delighted audience.”

Randy Rainbow isn’t one to shy away from serious ridiculousness. Rather, he revels in it. It’s part of his artistic palette. His new memoir Playing with Myself is a fearless Cinderella story of a little gay boy who staged an elaborate production of Snow White and the Seven Dwarfs in his suburban Florida backyard and grew up to become both a Hooters host and song parody internet sensation. And in the process, he’s had a gay old time doing it, in every sense of that term.

His real name “Randy Rainbow” set off his life’s path from day one. This given name, Rainbow writes, is one that “I had no choice but to grow into.” And yes, “Randy” is his real first name, not “Randall” or “Randolph.” As for the cognomen “Rainbow,” it came from his great-great grandparents, Jewish refugees from Austria-Hungary. They fled to England to escape anti-Semitism, then changed their surname “Regenbogen” to its English translation “rainbow.” Had they gone with “Rabinowitz,” Rainbow muses, “I might quite possibly be an accountant today.”

The book is dedicated to his mother Gwen, who inspired Rainbow’s encyclopedic knowledge of Broadway musicals. She backed up her son in his every endeavor, including that production of Snow White Rainbow produced, directed, and starred in when he was just eight years old. Gwen sewed his dress and delighted in the pair of yellow pajama bottoms her son wore on his head to simulate long-flowing feminine hair.

Gwen’s fierce loyalty to her son’s singular creativity helped him get through the tough days he faced in high school. As an overweight gay kid with what Rainbow calls “the corniest stage name ever,” he was an easy target for gay-bashing bullies. Another female champion was his beloved maternal grandmother, Nanny, an effervescent woman gifted with a salty vocabulary and sharp sense of humor. “If I have any sense of comedic timing, it comes largely from Nanny,” Rainbow says.

As for his father, he, too, was a strong influence though in an opposing fashion. In a chapter titled “Donald Trump is My Father,” Rainbow details the complex relationship he had with Gerry Rainbow an oft-married failed musician. At times the man could be supportive, living vicariously through his son’s theatrical performances. But mostly Gerry was an abusive father in a Trumpian sort of mold, belittling Rainbow time after time. Gerry was also prone to blasting his son with angry emails, often expressing his vitriol using all-caps in the missives. It’s no surprise that the two were estranged at the time of Gerry’s death in 2017.

Rainbow performed in a local children’s theater along with another future musical comedy star, Josh Gad (the original “Arnold Cunningham” in The Book of Mormon and voice of goofy snowman Olaf from the Disney film Frozen). From these humble beginnings, Rainbow set his sights on New York. Lights! Broadway! Fame! He wanted it all but had no game plan other than to go to New York and somehow forge a career in musical theater.

Rainbow’s story hurtles forward in an inexorable zig-zagging trajectory. He blunders his way through a series of day jobs, including an unlikely turn as the openly gay restaurant host at the straight male bastion of Hooters in Times Square; an office receptionist at a theatrical agency, where part of his job was to record how many times his fellow employees used the bathroom; and an assistant to a producer who really wants Rainbow to be nothing more than a boytoy.

Rainbow’s big break came from a pair of unlikely cultural convergences: the rise of YouTube and the fall of Mel Gibson. When Gibson was caught on tape screaming profanities, racist slurs, and anti-Semitic screeds at his girlfriend, Rainbow was inspired. Why not take Gibson’s rants and repurpose it? The result was Rainbow’s first video: his mock relationship chatting on the phone with his domineering new boyfriend “Mel.”

It was a hit. Then came Rainbow’s ticket to internet viral superstardom: Donald J. Trump’s election to the presidency. If anyone was a perfect target for no-holds-barred parody, it was the man Rainbow rechristened “Donald Jessica Trump.”

Rainbow converted his tiny New York apartment into a studio, where he created politically-themed Broadway song parodies. Harkening back to his Snow White days, he did it all: writing, producing, directing, and starring in elaborate productions. Rainbow performed in front of a green screen, then added in special effects, music, and footage of Trump and his cronies. Rainbow doesn’t single out any one of his videos as a favorite (best the reader jump onto YouTube and binge away); rather, he provides detailed instructions on just how he does what he does. It’s a wonderful tongue-in-cheek guide for anyone looking to create their own YouTube channel.

One of the strongest chapters in Playing with Myself is Rainbow’s near disaster with cancel culture. In August 2020, right after he uploaded Kamala!, his Camelot-inspired tribute to vice presidential candidate Kamala Harris, Rainbow became the Outrage of the Week. Someone with too much time on their hands dug up a motherload of Rainbow’s ancient tweets. On the surface the one-liners played like unfunny jibes of a bigoted jerk. In reality, these ten-year-old tweets were jokes from Rainbow’s days as Mel Gibson’s deluded boyfriend. “The whole premise,” Rainbow says, “was that I—a real-life gay Jew—was wacky and distasteful enough to date him. . . . it was not an audition to become a member of the Proud Boys.”

It was obvious that these were the tweets of a clueless character named “Randy Rainbow” and not the hardcore beliefs of their author. “The idea of ‘offend everyone ironically to prove you love everyone actually,’ was getting lost in translation,” Rainbow says. Still, he acknowledges ugly appearance of these tweets and is embarrassed by his past words.

It might be best to consider another Jewish iconoclast who challenged the status quo through satire and edgy humor: Lenny Bruce. Bruce’s pointed satire remains hysterical, though some of his routines have not aged well, particularly bits based on LGBTQ, an acronym that didn’t exist when Bruce was cutting edge. Like Bruce, Rainbow pushes societal buttons. But hypersensitivities of those looking to be offended results in self-righteous indignation that borders on censorship. As Rainbow declares in many a video, “gurl, please.”

Rainbow’s balance of self-deprecating humor and serious autobiography makes for a great read. Playing with Myself is aptly titled. Randy Rainbow is everything his fans want him to be: a joyful entertainer who loves performing for his delighted audience.