Playing As If the World Mattered: An Illustrated History of Activism in Sports 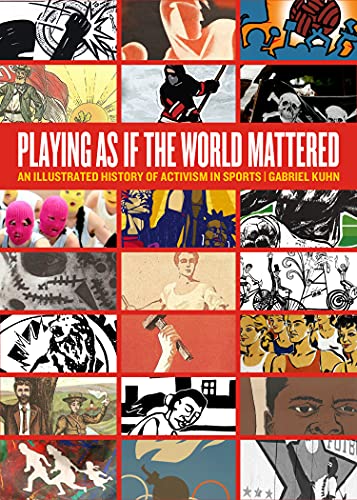 Author Gabriel Kuhn’s Playing As If The World Mattered: An Illustrated History of Activism in Sports is a thoughtful and easy to digest compilation of one-page commentaries with supporting full-color images, tracking examples of activism within the changing influence of the role of sports as integral parts of all societies.

Covering a period of more than 120 years, Kuhn begins with the advent of sports clubs and sports associations in Europe in the 1890s and carries it through the role of sports as it collides with the Civil Rights movement right through today’s period of mega-professional sports teams and world-wide sporting events like the World Cup of Soccer and the Olympic games.

His 160 pages covers a great deal of ground with example after example of activism threading its way throughout a pantheon of sports, from cycling to something known as radical cheerleading. It is an impressive pulling together of well-known and heretofore generally unknown to the general public, events, and individuals who played roles in the arena of sports activism.

While the book is definitely not for the average pro sports fan, those who have a keen interest in the role of sports as an influencer within past and future societies, particularly those who share Kuhn’s leftist viewpoint, will certainly find observations that should reinforce his belief that viewing and participating in various sports can and does have an important place in shaping the world in which we live.

The author concludes however, there should be a more enlightened goal for the role of sports within society, and that is to return to the ideal where everyone competes on a level playing field with no highly-compensated superstars, greedy owners or politicians who use sports for their own personal or political gains. What is lost is that despite its warts, mega-sports and world-wide sporting events do bring people of all races, income levels, and ages together in a shared passion for a beloved sports team. That too is a noble accomplishment.

Unfortunately, like a lot of great causes intended to help build a more perfect society, once people actually get involved, it pretty much all goes to hell, as Kuhn so aptly reveals.