Play On: Now, Then, and Fleetwood Mac 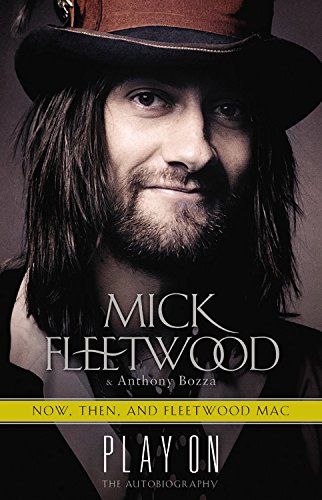 “. . . pretty much everyone can take away something positive from this book.”

In this autobiography of the prime mover behind the iconic band Fleetwood Mac, you get exactly what you expect: drummer Mick Fleetwood’s life story.

From childhood to his current reality at 67, Fleetwood recounts his tale in honest, often blunt, style. Perhaps that style was formed by his co-writer, Anthony Bozza, but it comes across as Mick’s voice.

And it covers all the juicy stuff that fans will surely want to know. Fleetwood himself, and his band in all its incarnations, has covered a lot of ground over forty years, in a rollercoaster from base to sublime, broke to rich (and back and forth a few times). Throughout he has held true to his vision and integrity, remaining the core around which creative genius, passionate and troubled relationships, and great music still revolve.

The journey has given him wisdom, which he shares through the narrative in a matter-of-fact way. Not all of the stars he’s been associated with have fared so well. Now a senior in the rock, pop, and blues pantheon, and inducted into the Rock and Roll Hall of Fame, he stands out as a man who built his life around love—of music; of family; of friends; of experience; of life in all its glories and debacles.

The volume includes four inserts of photos covering all of Mick’s eras. It also features stories behind the best-known and most celebrated albums and songs the band wrote and performed.

Fleetwood Mac was so huge in the United States that not everyone may realize the band originated in England. Fleetwood, a Brit, grew up during the heyday of The Beatles and Rolling Stones, and trained in the blues with John Mayall and in his ilk.

In fact, Fleetwood’s timing was perfect as far as contemporary music goes. He played with, opened for, traveled with, partied with, and rubbed elbows with darn near every major name in the music biz from the 1960s onward. So even if you’re not a Fleetwood Mac fan, you’ll enjoy the tidbits he shares about so many others on the music scene that bridges generations.

Having lived on both sides of the pond (and traveled around the world), Fleetwood has a unique viewpoint on how cultures and their defining events relate to each other. While the U.K. and the U.S. shared a cultural revolution during the ’60s and ’70s, England’s was influenced by the results of WWII while America’s was influenced by the civil rights movement and the Vietnam War. The tides of change intersected in the blues and rock-and-roll, and Mick Fleetwood banged his drums all the way through.

“Things were happening,” he says; “there was something coming together, but I didn’t know what it was. I knew it was bigger than me. It was bigger than all of us, even those at the centre of it all. And it was coming our way.”

His dedication held the band—or some form of it—together through all the changes. Few groups have lasted this long even when things among and around them were tranquil.

Equal to his dedication to his people, he remains dedicated to his art and craft. “Music is a beautiful language, one that anyone with a beating heart can understand, no matter where they’re from.” For that reason, pretty much everyone can take away something positive from this book.