Play with Me: Dolls, Women and Art 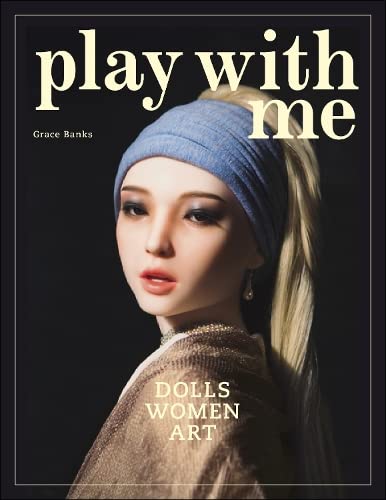 With its cover image of an eroticized version of Vermeer’s Girl with a Pearl Earring this book would draw the eye on any coffee table, though what this  image says in terms of Grace Banks’ overall thesis is open to debate. The original Girl is very much the prisoner of the artist’s “male gaze,” a Dutch servant girl adorned in an “exotic” head-dress, and wearing an improbably large pearl which may or may not belong to the artist’s wife. Is Banks’ girl subverting that gaze by wearing eye make-up and a come-hither pout? Or just doing what images of women traditionally do, namely selling a product? Or both?

Banks’ overall thesis is that “artists are reclaiming the ownership of the female body from the pervasive male-defined tropes and spaces for the female body,” insisting that with more women artists and more women presenting themselves inter alia in nude selfies à la Kardashian, women are now presented in all their diversity; “naked or dressed (sic)the female nude can be sexy, sexless, political or all three.”

The book is organized in four sections: Blow-Up, Muse, Female Gaze, and Cyborg, representing “some of the most pressing problems for women today— the commodification of women’s bodies, the bias for women’s bodies created by men in art, the changing nature of gender binaries and what will happen to the female body in the future.”

Unsurprisingly there is a lot of overlap between the four categories. A recurring theme is the deployment by several artists (male and female) of RealDolls, life-size sex toys, that are depicted as straying outside their usual brief by “taking a bath, counting money or trapping a mouse.”

Is this real subversion of the male gaze, or only when RealDolls are managed by female artists? Are only men then interested in sex dolls? At any rate, Jesse, companion of sex doll Heather for 15 years, obligingly explains to artist Amber Hawk Swanson “his relationship to a transfeminine spectrum and Heather’s role as a gender surrogate and psychic prosthetic.” Quite, Jesse.

Each of the four sections includes an introductory essay, and interviews with artists represented. The artists—41 of them—are expected to “edit and hand over kernels of wisdom on the intersection of politics and culture, that we might not have noticed for ourselves, for a mass audience.”

Several artists struggle gamely to produce an answer corresponding to Banks’ interests though one frankly states “my work is open to interpretation . . . whether it is understood or not is not my problem.” Many openly refute the idea that their work is at all “political.” Yinka Shonibare, for example, denies that he is a political artist, but uses headless mannequins as a working class protest, and “to address exclusion of non-Western art from the contemporary art scene.”

Articulate Elizabeth Jaeger, when closely questioned as to her gender politics, says “I use these sculptures to talk about situations I observe, but questionably understand. To replicate them is an effort to understand them more fully. If I claimed that I talk about gender politics I would just be dressing up my childish and obsessive fascination with my own and other’s interpersonal relationships . . . in terms of what I am trying to say it’s along the lines of life isn’t a set of neat ideas—it’s a convoluted mess of contradictions. I try to let my work reflect that.”

Adding “I’m not sure I can relate to male-gaze free, as I think I males gaze at women all the time. Both men and women objectify women and although I have educated myself enough to a degree that I am aware that I do it and make work about these tendencies, I can’t yet stop.”

In terms of witty commentary, two artists stand out: Jennifer Rubell, with a rather obvious but still amusing idea of a plastic shop mannequin “re-designed to crack Texan pea-nuts between her thighs” representing “the female sexual figure on a pedestal who is simultaneously a ball-breaker”; and Nicola Constantino who had a bar of soap made from fat she had removed through liposuction representing “her interest in the intersection between media-driven notions of beauty and reality”!

It would have been interesting to hear from some contemporary artists who have been outspoken on sex and gender issues; Tracey Emin and her famous unmade Bed, and cross-dressing potter Grayson Perry, are unfortunately not included here.

Is women’s objectifying women and demonstrating “sex positivity” enough to count as subverting the male gaze? Or likely to be interpreted as just joining the party. There seems to be little attempt to demonstrate the absurdity of “objectification” by turning the tables on men. We could have, for example, a man promoting a woman-related object . . .  a stroller, a tampon, a frilly apron . . . in the manner that women are still widely used to promote male objects of their desire . . . typically cars.

The essays which would have benefited from tighter editing contain many interesting ideas sometimes not fully digested. The book ends in the air without authorial conclusions. It would have been good to hear from Banks herself whether she feels that her artists met their brief of explaining how they are subverting the male gaze “for a mass audience,” or whether male and female artists alike are still largely commenting, with varying degrees of success, on women’s continued objectification.